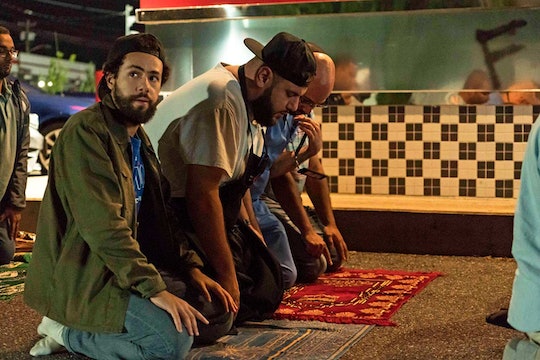 Some of the best shows don't have enough episodes per season and it's super frustrating. When you wait for that big premiere — like one of the newest comedies to hit Hulu, Ramy — you've committed to invest in the show's story and want more, not less. This new show may become your next new obsession, but how many episodes is Ramy? With such a refreshing take on the first-generation American experience, the answer is "not nearly enough."

According to USA Today, Ramy will give you 10 episodes in its first season. Through those 10 episodes, you'll follow a first-generation Egyptian American Muslim, Ramy, who lives in New Jersey with his immigrant parents and sister. He struggles with religion, relationships, and "finding his purpose after he gets laid off from a failing tech startup." The show was written and created by Ramy Youssef who pulled inspiration from his real life experiences. But don't expect the series to mimic Youssef's life completely. Those 10 episodes are filmed on a set that is, according to New York Times, "a mock-up of his childhood New Jersey home," with "pictures of Youssef and his sister were hanging on the wall."

Youssef said in that Times interview Ramy is revolutionary in some ways. "On one level, it’s very clear that there’s nothing out like it," Youssef said. "There’s this initial reaction that you have of: 'Oh, man. I have a lot of responsibility. I have this responsibility to speak for my people.' Then you start to make the thing and you’re like: 'That’s an impossible goal. If I try to do that, it just won’t work.'"

Though fictional, Ramy, focuses on Youssef's alter ego who, as Vanity Fair described, is "a more aimless version of himself with loving parents, a rebellious sister, and an extended group of family and friends to help him on both his spiritual and carnal journeys." In an interview with Youssef, the show was described as the story of an average Muslim family through this atypical, yet extremely typical, lens. The paradox is why Ramy has already garnered accolades across the board — because it doesn't take the usual tale of a Muslim family, but instead, lets you sink into their beliefs, traditions, and Ramy's place inside and outside it all.

Youssef explained to USA Today why it was important to use those 10 episodes to depict the millennial Muslim in a more accurate way, including with topics like sex, arranged marriages, and drug use. "A lot of the stuff I see (in media) is people trying to erase where they came from or distance themselves from their parents, but that’s just not what I’ve experienced in my life," he said. "What I wanted to highlight was someone struggling to adhere to their faith but also wanting to be in the present moment and experience other things. That’s something a lot of us go through, whether you’re Muslim or anything else."

By now, you should be more than excited to dive into Ramy for 10 episodes. Even 10 won't feel like nearly enough once you get into Ramy's world. It doesn't matter if you've seen Youssef's stand-up or not — it's not required to get a sense of his comedic timing, because it'll become immediately clear in the first episode. Ramy may not be a traditional take on Muslim life like all the others you've seen before, but that's a good thing. Youssef wanted to all an authentic story that untangles the complexities of being Muslim in America while dismantling the stereotypes. And the world could definitely use more of that.