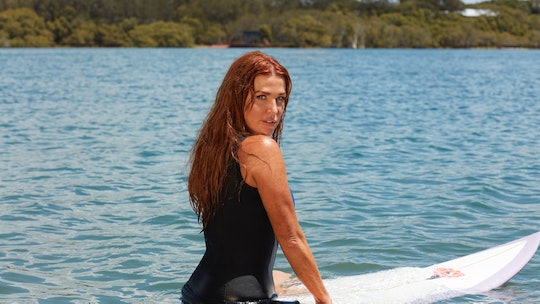 This summer's Reef Break appears to be ABC's answer to the question "WTF happened to The Catch?" but viewers who've been tuning in to the series may be wondering how many episodes Reef Break has left. Last year, it was announced that ABC picked up the Poppy Montgomery vehicle for 13 episodes, according to Deadline, so the series is about midway through its first season, with the finale slated to air on Sept. 12.

Reef Break follows Cat Chambers, a former pro-surfer and international thief turned government fixer for the fictional U.S. territory of Reef Island. It's sort of like The Catch meets Hawaii Five-0, with Montgomery tackling a bunch of her own stunts. Even though she described herself as a "mediocre surfer" in an interview with ABC's local New York affiliate, much of the surfing on the show is done by her, with a stunt double for the big tricks. But Montgomery really did film all the jet ski and boat chase footage herself on the water.

"I don't think I've ever seen a woman on television, certainly not network television, who surfs, and skateboards, and drives Miami Vice-style boats fast," she said ahead of the series premiere. "I don't know that I can recall any show where I've seen a girl do that and so I'm really proud that we've pulled that off."

Montgomery, who spent more than a decade helming CBS crime procedurals Without a Trace and Unforgettable from 2002-2016, applies her considerable expertise as an executive producer on Reef Break. The concept for the show was actually her idea.

Reef Break has been in the works for a few years, but when Unforgettable got rescued by A&E after CBS canceled it three seasons in, it threw a wrench in Montgomery's plans. She told another local ABC affiliate in Utah:

The series films in Queensland, where 2018's Aquaman also filmed, and it was something of a homecoming for Montgomery, who's originally from Sydney.

As Cat, Montgomery plays a seasoned criminal with a sudsy romantic history, who's come home to face her past and, hopefully, settle down. Cat's history makes her a prime candidate when the governor of Reef Island needs a person on retainer to perform shady tasks in the service of solving crimes. But Montgomery is quick to point out that this show isn't nearly as dark (or murder-focused) as her previous roles. "[The crimes are] more modern-day pirates and, you know, a kidnapped heiress, and stolen yachts. It's very fun and free spirited," she says.