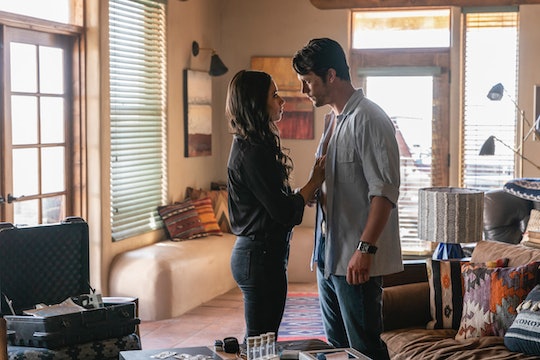 The Season Finale Of 'Roswell, New Mexico' Is Almost Here

WIth summer fast approaching, all your favorite CW shows are winding down to their seasons’ ends. Unlike the rest of the network’s popular shows, which premiered in the fall, Roswell, New Mexico, debuted in January, so the season will run well into April. But, if you’re counting down the episodes in anticipation of the finale, you’re probably wondering: how many episodes is Roswell, New Mexico Season 1?

According to The CW, the finale of Roswell, New Mexico will air on Tuesday, Apr. 23, leaving behind an 13-episode first season. The network hasn’t released any news about the show’s future, but according to Cancel Bear, ratings have been solid all season, so fans should expect to see the series return. In January, The CW announced that it would be renewing ten of its current series including Legacies, Black Lightning, and DC Legends of Tomorrow — three shows that have the same viewership numbers as Roswell, New Mexico. So if the decision to renew is based on ratings alone, there is a good chance the network will bring the series back for a second season.

A 13-episode season may feel short, especially for a CW show, but Roswell, New Mexico showrunner Carina Adly Mackenzie told Assignment X that she enjoyed structuring the show with a shorter season. “I was very well taught on The Originals by Julie Plec and Michael Narducci about how to structure an episode and a season,” said Mackenzie. “I was used to doing twenty-two-episode seasons, so it was actually really nice to do a thirteen-episode season. But what I did learn a lot about was structuring a murder mystery. That was the new thing this season, which was, I wanted to do a murder mystery, but I didn’t actually know how to do that, so I had to learn as I went.”

She added that the balance of the first season — between the alien conspiracy story, murder mystery, and social commentary — shifted from episode to episode, but the essence of the series has always been its epic relationships.

“Right now, we’re definitely in murder mystery world, but the heart of the show is always the romance,” she told Assignment X. “Whether that’s the romance between Max and Liz, or the romance between Michael and Alex, other romances that crop up over the course of the season, or the relationships between the three aliens, which are also structured a lot like romances are, in the way that Max and Michael are right now – we know that they used to be best friends, and right now, they’re in a difficult place, and we are telling that story of them coming back together, almost as if it’s a romance.”

With only a handful of episodes left in the season, fans are hoping to find more answers about Rosa’s death and the aliens’ history in Roswell. Most of the key players in town either know about their existence or are on their way to finding out, so it will be exciting to see what kind of revelations and twists the season ends with.

New episodes of Roswell, New Mexico air on Tuesdays at 9 p.m. ET on The CW.