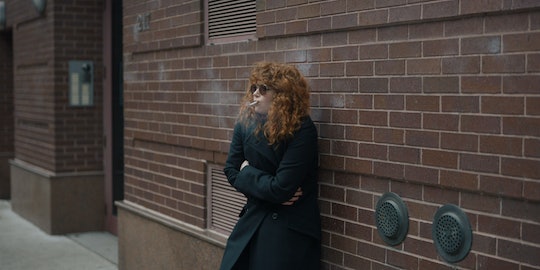 If you've ever experienced a particularly vivid bout of déjà vu, then boy do I have the show for you. In the Netflix series, Russian Doll, Natasha Lyonne plays Nadia Vulvokov — a video game programmer who dies on her 36th birthday, then wakes up again to relive the day over and over again, dying each time. If, like so many Netflix series, Russian Doll is going to suck you in and refuse to let you go until you've finished the entire season, you will understandably be wondering how many episodes Russian Doll is. The answer is: just enough to get you hooked, my friends.

The eight-episode original Netflix series — not to be confused with the reality TV series, Russian Dolls — was created by Amy Poehler, Leslye Headland, and Lyonne, all mega-stars in their own right. If you're curious as to whether this is the show for you, rest assured — you don't need a lot of time to view each episode. Each one is fairly brief, with the season finale clocking in at just 30 minutes. The rest are even less of a time investment. The Netflix show description of Russian Doll says, "Nadia keeps dying and reliving her 36th birthday party. She's trapped in a surreal time loop — and staring down the barrel of her own mortality." If it sounds dark and morbid, it is — but you'll still laugh. A true dramedy, Russian Doll is an experience that lets you simultaneously cringe with each new way Nadia meets her fate while laughing at the dialogue beforehand. Weird combo, I know, but it works.

Nadia's story takes place the day before Groundhog's Day in a clear nod to the Bill Murray classic which has a similar premise. But while Murray simply had to go to sleep to reset the clock, in Russian Doll, the day always ends in Nadia's death. In every episode Nadia dies in various unimaginable ways while trying to figure out how the heck she became trapped in the endless loop in the first place and how the heck to escape it. But like in the similar stories that came before Russian Doll, Nadia experiments with changing her choices to see if it affects her day or her death. Though once she understands the rules of the situation, she finds that living the perfect day isn't the goal. Rather, the goal is to figure out her true path while at the same time navigating the choices of others around. Because they, too, can alter the story, just as in real life.

The question becomes: will Nadia die regardless of her choices or will changing one thing eventually unravel a new path that keeps her alive? And what about when Nadia cross paths with Alan — the dude who may be an integral part in escaping this death-cycle of hell? That's what Nadia's journey covers over the tightly-written eight-part series. Plus, she shares custody of a cat named Oatmeal with a bodega and if that's not reason enough to watch, I don't know what is. Because, cats.

Though it's unknown if another season will be picked up or not, Russian Doll's first eight episodes are enough to lay the groundwork. However trippy, I find it strangely delightful to watch a character re-living death until they have figured a way out of the maze. It's an all-too-real reminder that one decision can change everything, but maybe the end result is out of your hands. Too deep? Meh. I'll let Nadia show you what I'm talking about. All eight episodes of Russian Doll are ready to stream on Netflix now.