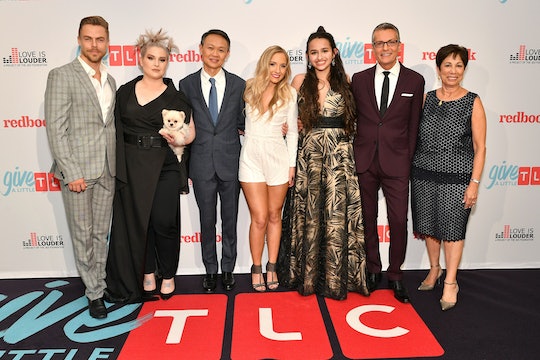 Wedding season is in full swing, which means more Say Yes to the Dress is on its way. The 18th season will feature a new slew of brides hoping to find their perfect dress at the renowned New York City bridal boutique, Kleinfeld Bridal. Toss in a few unhappy customers and you've got yourself a hit show on TLC. Though massively popular in previous seasons, how many episodes is Say Yes to the Dress in Season 18? I have the 411.

Though the show premiered in 2007 with just six episodes ordered, the following seasons ended up with 16-24 episodes. Season 18 is star-studded, though I can't say for sure how many episodes you'll get at this point. My best guess is that it'll follow the same formula as past seasons, falling somewhere in that range. As you know, each episode features a different bride with a different set of circumstances. It could be body image, it could be budget or time-constraint, or it could be that she can't find the perfect dress to exchange "I do's."

The show is hosted by Randy Fenoli in the upscale Manhattan bridal salon, with the goal of helping the bride find "the" dress. Of course, she always has an entourage, and everyone in it has major opinions, which can make or break the bride's decision. TLC describes the show, “Part bridal story, part fashion makeover and part family therapy session, each Say Yes to the Dress episode looks at the personalities and craftsmanship that come into play as the Kleinfeld staff goes to sometimes extreme lengths to realize each bride's dreams."

Season 18 opens with Dancing with the Stars couple, Val Chmerkovskiy and Jenna Johnson who were tasked by the Kleinfeld team two months before their wedding to scout the perfect reception dress (which is the real MVP of wedding attire, in my opinion). The dancers aren't the only highlight of the season. WWE Hall of Famer, Mick Foley, shows up to help friend, Heather, find a last minute dress after hers is unexpectedly ruined. Stars aside, there are also always plenty of relatable, real-life women chosen to appear. The show will also focus on brides in different stages of the wedding process with one woman who looked at nearly 100 stores and still, no dress. Another lost her home and wedding dress in the California wildfires. And another bride is pregnant, dealing with unnecessary opinions from relatives.

The Fenoli family will also get some air time, as Fenoli (longtime consultant) heads to Barcelona Fashion Week to debut his second bridal collection where a family reunion takes place during his niece's wedding.

Not all brides leave happy, and there are sure to be a few joyful tears shed too. Season 18 serves as great inspiration for those in search of their own dream dress and you'll also get a firsthand look at some of the most extravagant weddings around the world, from Ireland to Tuscany.

Whether you're married to the love of your life, totally single, or engaged and in need of your own wedding dress, Season 18 of Say Yes to the Dress is coming at you with fresh new episodes sooner than you think, so get on board. Anyway, it's never *not* fun to live vicariously through other brides when it involves wedding planning with money you don't have, am I right? Maybe it's just me.