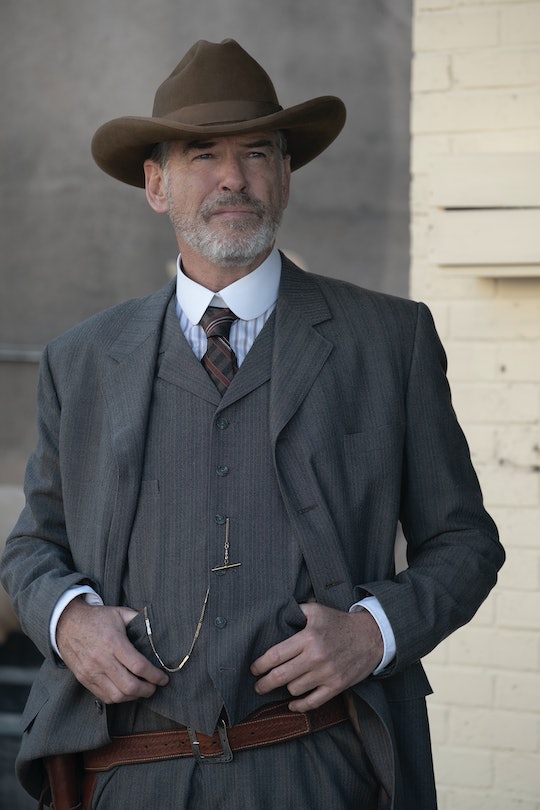 Preparing for the end of a series is a process. Earlier this year, AMC announced that two of its dramas would end in 2019. One of them is The Son, based on Philipp Meyer’s New York Times best-selling novel. Once you process the news, the question is — how many episodes is Season 2 of The Son? Don't worry Pierce Brosnan fans, the show may almost be over but none of the family fights, betrayal, secrets, or classic western fight scenes will be missing as the show rides into the sunset.

I couldn't confirm much via an official statement, but IMDb reports The Son Season 2 as having 10 episodes. That is a full episode order on a cable network like AMC, so you'll get to watch every detail as Eli McCullough (Brosnan) secures his legacy in the oil industry in 1917 — no matter if his family goes up in flames as he tries.

If you've been following the show since the beginning, you might still feel cheated out of something, because you know the series was supposed to be three seasons, but if it's any solace, Brosnan doesn't share your sadness. In an interview with Parade he said, "I think there’s a great finale to this. I think it sits on the shelf as a wonderful bookended drama, and I don’t know how they could’ve carried on with a third season. I was very happy to walk away after two seasons."

I think he has a point here. Books becoming TV series is a trend that seems to be becoming more popular in recent years. But sometimes I wonder exactly why certain stories are adapted for television instead of movies, which have a more definitive end. Some series opt to tell the story beyond the book, but isn't there a risk of the series moving too far away from the original story? Since we're talking about The Son, what I'm saying is that one family can only survive a war among themselves for so long.

Brosnan explained why there is so much tension under his roof in the same Parade interview. "The man is driven by a very warped morality of humanity, which, to him, is absolutely in keeping with his own normality of life,” he explained. “He forges on to make a better world for his family, for his sons, and he has no real scruples, except unto himself. He is a modern man living in a time that is on the cusp of greatness, which he knows, and he wants to be part of that and by any means possible.”

That's selfish — but Eli's quest for dominance in the industry would be a lot easier if his family had any interest in helping him. His son Pete (Paola Nuñez) tries to run away with his girlfriend to Mexico to escape his father's exploits, but Eli travels there to bring him back. Brosnan said it was "because he loves him. He wants him back. He needs him. He is the good parts of my soul. He is the part that is the most human and the kindest, and it is a pure gut instinct of fathering." That sounds sweet — but I don't think it helps Eli's cause much.

The only person in Eli's family who seems to share his mentality is his granddaughter Jeannie (Sydney Lucas) but you'll have to wait until Season 2 of the series premieres Apr. 27 to see if the pair succeeds in their mission to control the oil industry, or if their exploits will mean the end for the entire family.