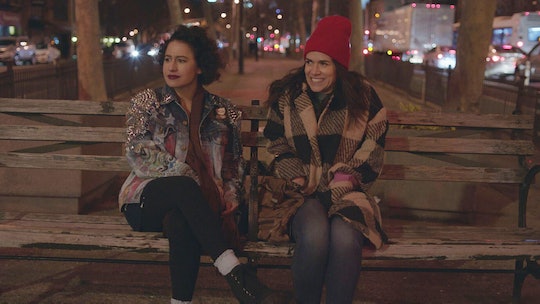 'Broad City' Only Has One Season Left

The last season of Broad City premieres on Comedy Central on Jan. 24, which means the adventures of Abbi and Ilana are coming to an end. Fans only have a finite number of episodes to enjoy before it's all over. While that's a distressing thought, don't worry yet — there's still one whole season left to go. But exactly how many episodes is Season 5 of Broad City? If you're going to count down to the series finale, you're going to need to know.

According to Forbes, there will be 10 episodes total in Season 5. That makes sense, because that's the pattern Broad City has always followed. There may have been lengthy gaps between seasons or several schedule shifts over the years, but the episode count has remained consistent. Every single season, from the very first one until the very last, has been 10 episodes. If it's not broken, why fix it, right?

The show has steered clear of major spoilers in the weeks leading up to Season 5. Even the trailer only featured a montage of Abbi and Ilana from previous seasons; there was no new content to hint at upcoming storylines. However, Forbes' review of the first episode of Season 5 indicates that this season will be all about Abbi and Ilana starting the next chapter of their lives.

Season 5 begins with "Stories," which switches up the episode format in a unique way. It's Abbi's 30th birthday, and she's celebrating with Ilana by traveling from the tippy-top of Manhattan all the way to the bottom. Along the way, they document their journey on Instagram Stories, which lends the episode its title and influences the way it's filmed. Captions and gifs pop up onscreen just like they would on the 'Gram, making it an unusual (but still very Broad City) start to the season.

A lot has changed for Abbi and Ilana over the years. They were 25 and 22 years old respectively when the first episode of Season 1 debuted, but now they're 30 and 28; they have new challenges to face and new anxieties to navigate. Abbi struggles with turning 30 because she feels like she hasn't accomplished everything she thought she would by that age, which is a relatable (but very different) issue than something she would have dealt with five years ago. And it's appropriate that the final season would show Abbi and Ilana dealing with the milestones of their 20s before they head off into the next decade.

In a way, that reflects the real life journey of showrunners and stars Abbi Jacobson and Ilana Glazer. Jacobson told Variety that she and Glazer had grown with the show, evolving alongside their characters. Broad City was their first experience running a show, but now they've partnered with Viacom to produce and create even more series; there are already three in the works at Comedy Central, and maybe more to come.

The world of Broad City is definitely changing. It sounds like the final ten episodes might explore everything that comes with getting older and figuring out your place in the world, which is a fitting note for the series to end on.