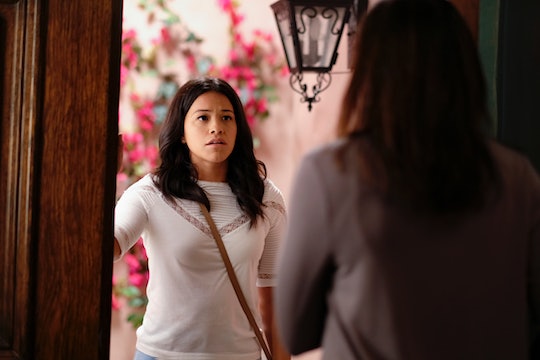 Fans Will Say Goodbye To 'Jane The Virgin' This Summer

The fifth and final season of Jane The Virgin is here, and fans are dying to find out how Michael came back, who Jane chooses, and who the narrator is before the series ends. The series finale will be bittersweet, and viewers are counting down the weeks until they have to say goodbye to Jane once and for all. But how many episodes in Season 5 of Jane The Virgin should fans expect?

The final season will air with 19 episodes. According to the show’s executive producer Brad Silberling, Jane The Virgin will end with its 100th episode — a decision showrunners had planned from the start. “It is a wonderful final season of the show,” Silberling told Metro in an interview last year. “It is exactly as it was laid out… [We’ve] always known when it was going to end. It will be 100 episodes when it’s done and 100 is exactly where Jennie [Snyder Urman, executive producer and creator] always hoped it could end the story. So it’s perfect.”

Season 4 ended on Episode 81 of the series, aptly titled “Chapter Eighty-One,” which leaves fans with 19 episodes until the show reaches its 100-episode mark. “Chapter Eighty-Two” premieres on Wednesday, Mar. 27 on The CW, and with new episodes dropping weekly, you can expect Season 5 to go well into summer. Counting 19 weeks from the premiere, the series finale should air in late July or early August, but fans will get an exact date when The CW releases its summer schedule.

While the final season is wrapping up Jane’s storyline, it won’t be the last you hear of her. When talking to Variety, lead actress and director Gina Rodriguez said that fans should expect some exciting twists this season, and they’ll also get a lead-up into the series’ new spin-off, Jane The Novela. “There’s a lot of dope things this season,” she told the outlet.

“Season 5 is incredible—it still twists and turns. It’s gonna give you that same beautiful roller coaster of a ride of emotions and experiences. And there’s such beautiful episodes outside of the spaces that we’re used to, and it just really gives us a different scope of what Jane is going through and how we’re gonna close this whole story up and lead you into the spin-off.”

Rodriguez explained that Jane The Novela will be a series of telenovelas based on novels Jane has written, and she admitted that she’s excited to keep Jane’s presence on TV alive. “I’m really super stoked about it, because it’s seldom that you get to hang on to a character after it’s done,” said Rodriguez. “It’s pretty much like the story Jane has been writing all along. We’ve seen her writing, but we’ve never really seen the kind of writing she does. It’s her imagination, her beautiful story that she comes up with.” There’s still no official word on when Jane The Novela will premiere, but Deadline reported that Jacqueline Grace Lopez will play the lead role in the series.

It might be awhile before the spin-off premieres, but fans still have Jane The Virgin's 19-episode final season to dive into. New episodes of Jane The Virgin air on Wednesdays at 9 p.m. ET on The CW.