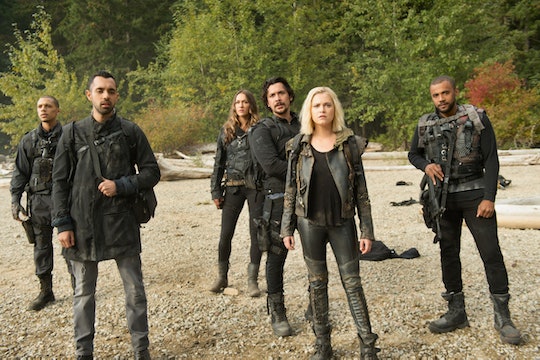 A whole year is a long time to wait for a new season of a network TV show. So, naturally fans want to know everything there is to know about it. You have questions like, "how many episodes is Season 6 of The 100?" and I'm here to tell you — plus answer other questions you might not even know you have yet. Whoever wakes up this season will be in a whole new world, so there is a lot to learn.

The first order of business is the number of episodes. An official count is yet to be released, but IMDb currently lists 13 episodes in Season 6. After Season 3, no season has been longer than this so I think this is probably accurate. In any case, there won't be any fewer than 13. If you need to know when Season 6 of The 100 premieres, the first episode airs Tuesday, Apr. 30 at 9 p.m. ET on The CW.

Now that some logistics are out of the way, it's time to move on to the trailer, because a lot of drama can be packed into four minutes. Not only have fans waited a long time for this season, you're also about to wake up on a new planet with your faves. Season 5 left Earth uninhabitable. But don't worry, the new place is peaceful.

At least, that's what Clarke thinks. At the beginning of the trailer she says, "From what I've seen, these people are happy, their world works." But I need to know what dictionary she uses, because all of the evidence I can gather from this place is downright scary. There's a lot of running and blood and talk of betrayal — that's not my idea of peace.

Someone also mentions an "eclipse induced psychosis" that apparently causes the forest to "wake up." Oh and there's the fact that "there are things and people in these woods that want us dead" and "if you fall behind, you will be." Yeah, I was always picked last for sports in school, so I'm just going to stay where I am, thanks.

Of course, Monty and Harper won't be joining everyone on this new adventure as they chose to stay on Earth and die together. Fans are definitely going to miss them this season, but they left a legacy behind to carry on. So, if you already miss Monty and his pure intentions, don't worry. Someone shares them — at least at first.

Their son Jordan is alive and a completely blank slate. All he has to go on are his father's words because he hasn't seen the bad in the world yet. Showrunner Jason Rothenberg told TV Guide, "Everything [Jordan] experiences in Season 6 is going to be new and fresh and he's going to be wide eyed and excited and horrified."

This lack of experience means he's going to try to honor his parents as best he can. In fact, everyone is going to try and honor Monty's wishes and do better. But even in a new world after waking up from crypto-sleep, making a real change is hard. "Just because they're on a new planet doesn't mean the things they've done don't follow them there, Rothenberg said.

There are a whole lot of unanswered questions waiting for fans in Season 6, plus new challenges to come for everyone. So, the more everything changes the more it stays the same, right? Basically, just watch the show and hold on tight. The landing onto this new world doesn't seem as smooth as it first appeared.

More Like This
For Real Life!? More 'Bluey' Is Coming, But We'll Have To Hang Tight For Season 4
The 20 Most Romantic Quotes From Friends
When Does 'Yellowstone' Season 5 Come To Peacock? Not Soon Enough
10 Parenting Lessons We Learned From Red & Kitty In 'That '70s Show'
What Parents Are Talking About — Delivered Straight To Your Inbox