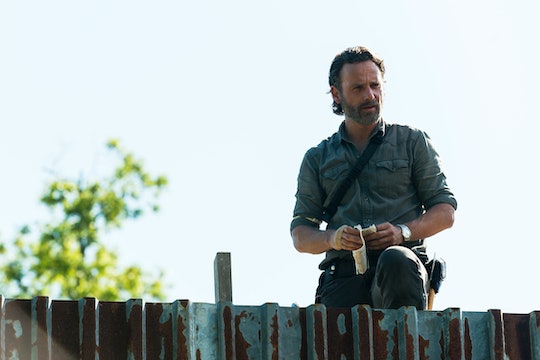 Don't Miss A Moment Of 'The Walking Dead' Season 8

The Season 8 premiere of The Walking Dead is finally here and not only is it the start of the eighth season, but it's also the 100th episode. Fans can expect this episode to be extra special, which in the world of TWD, probably means more blood. That being said, I'm certainly excited to see what this season has in store for my favorite characters, but how many episodes is Season 8 of The Walking Dead? Thankfully, it'll be a full-length season.

There will be 16 episodes in total for Season 8, however, just like past seasons this will be broken up into two separate halves. The first episodes will air from Oct. 22 through December and the second half of the season will begin airing in February. So expect to be hit with a possible major cliffhanger come December, prior to the show's two month hiatus.

Going into Season 8, the show creators are continuing to stick with its comic book origins. This season is all about war, focusing on the storyline that the comic book dubbed "All Out War." In the comics, Rick Grimes, along with the various residents of the Alexandria Safe-Zone/Kingdom/Hilltop Colony join forces to resist the tyranny of Negan and his saviors. This battle actually lasts for a long time in the comic books, so it'd make sense if this took up the whole season.

At the end of Season 7, the war was clearly brewing. Rick and the Alexandrians had split up in order to make new alliances against Negan. Maggie and Paul took over the Hilltop, but the former leader, Gregory, had begun feeding intel to the Saviors. Carol and Morgan were able to convince King Ezekiel at the Kingdom to join Rick's cause and he made Carol and Morgan his chief strategists/generals. Rick raided Oceanside for weapons and then made the mistake of giving them to the Scavengers, who were later revealed to be allied with Negan.

Then there's Negan's home base, the Sanctuary, where Dwight is going to be acting as a mole. He's been able to weasel his way to being a top Savior lieutenant. Hopefully, we'll see him use this power to thwart Negan's plans in Season 8. Besides the upcoming war, there's still the small matter of the actual zombies. Although they were pretty absent in Season 7, you can expect to see them again in Season 8.

If you watch it and you know the show pretty well, you will see things that are direct callbacks to previous episodes, even as much as me shooting, shot for shot, a sequence that was in an earlier episode. We went into it really, No. 1, wanting to give the fans something exciting.

Also, unlike last season, Rick will really step up this time around. Last season, fans were disappointed to see Rick actually bow down before Negan, but Andrew Lincoln, who plays the beloved character, told Rotten Tomatoes Rick is done playing Mr. Nice Guy. "[Rick'll] never bow before [Negan] again," Lincoln explained. "It's basically a polar-opposite Rick that begins this season, and I'm so happy to be playing that man and not the last season's Rick."

I'm sure the fans are happy to hear that as well. It looks like there is a lot to look forward to in this new season. Hopefully, it lives up to the hype, but I have no doubt this season will be even better than the ones that came before it.