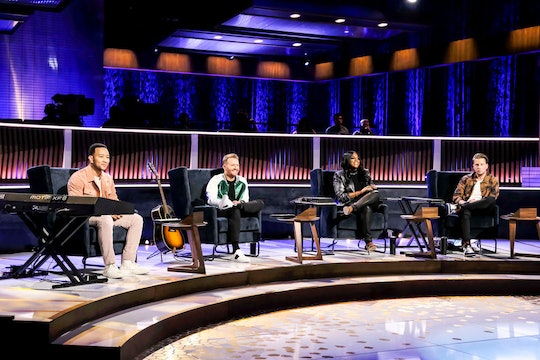 Maybe Songwriters Are Finally Getting The Recognition They Deserve

I have no musical inclinations at all, but that's never stopped me from pretending. When I was little, I'd write songs for fun, dreaming that one day The Backstreet Boys or Hanson would sing one of my songs on stage. I eventually let that dream die but the songwriting process still intrigues me. So when I heard there was an NBC show about it I wondered — how many episodes is Songland?

According to Variety fans get to watch songwriters pitch their musical masterpieces to some of today's biggest artists over 11 episodes. Stars seeking songs to record include The Jonas Brothers, will.i.am, Meghan Trainor, Charlie Puth — and on the May 28 premiere — John Legend. Thanks to NPR, I'm now glad I didn't get into the business, because it's one the hardest professions to break into, and one of the most thankless.

On Legend's episode, judge Ryan Tedder asks contestant Tebby Burrows if she makes money as a songwriter. Burrows answers the question by describing herself as "'a little bit like Clark Kent,' working a marketing job during the day and gigging at night more for passion than profit," as reported by NPR. Still, one look at a trailer for the show and it's obvious that the whole Songland experience is a dream come true for these writers, no matter if their song is picked or not.

OneRepublic's Tedder is one of the most well-known modern songwriters. Aside from being the lead singer of the popular band, he's written mega hits for artists everyone knows. Thanks to Tedder fans have Taylor Swift's "I Know Places," Adele's "Rumor Has It," and Beyoncé's "Halo." That's just three of the biggest hits he's responsible for.

But even Tedder knows the songwriter's struggle. He once worked at Pottery Barn and wrote songs on the side. "If a guy working in the mailroom of Sony comes across the next Beyoncé, he gets more notoriety for discovering that artist than the songwriter that writes the song that becomes that artist's hit," Tedder told NPR. "Not only are we on the bottom of the food chain, the way the payment structure is set up, we get paid the least. And with streaming, that income has dropped drastically."

So, even if a contestant's song doesn't get chosen, with Songland the goal for Tedder and everyone else involved is to get as many songwriters as possible the recognition needed to help launch as many careers as the show can. The artists and judges on the panel each week will help every contestant write the best song possible, suggesting lyric changes, tempo adjustments, and melody tweaks to make sure songs have the most impact possible.

As Nick Jonas says in the show's trailer, "You've gotta write your songs, and then you've gotta realize that you have a responsibility to the world now." That's a huge undertaking — but a wonderful one. Anyone who chooses it should be rewarded. So, I can't wait to see how many lives are changed thanks to Songland.