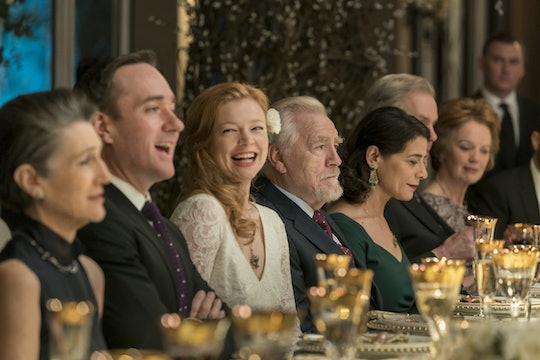 Season 1 of HBO's sleeper hit Succession tackled quite a bit, including a hostile takeover gone awry, drunken manslaughter, and lovable cousins. The first episode of Season 2 picks up with the consequences of the Season 1 finale, setting fans up for more bickering between The Roy family. That said, how many episodes are in Season 2 of Succession?

Buckle up, Succession fans, because Season 2 returns with 10 new episodes beginning Sunday Aug. 10 at 9 p.m. ET. A few outlets reported only eight episodes, so I had to dig to confirm there will be 10 episodes, the same as Season 1. The series was renewed only one week after its June 2018 debut, so fans had a year to wait between the Season 1 finale and the Season 2 premiere.

It appears the whole ensemble cast is returning for Season 2, plus a couple new faces, including Oscar winner Holly Hunter, according to Deadline. Hunter joins the cast as Rhea Jarrell, "the politically savvy CEO of a rival media company." Another new addition to Succession, according to The Hollywood Reporter, is Cherry Jones, (Signs, 24) as the owner of the liberal media empire Rhea works for.

The trailer for the second season shows Logan discussing whether to sell the company to investors, or fight to stay independent. As you can see, it doesn't go too well.

Succession was created by Oscar-nominated British comedy writer, Jesse Armstrong (Peep Show, The Thick of It), and produced by Will Ferrell and Adam McKay (the Oscar-winning filmmaker of The Big Short, who also directed the pilot). It centers around media mogul Logan Roy (Brian Cox), and his three children: the weak and troubled Kendall (Jeremy Strong), playful Roman (Kieran Culkin), and smart, relatively moral Shiv (Sarah Snook) as the jostle for control of his media empire. The official HBO description states, "While the future looks increasingly uncertain, it is the past that threatens to ultimately destroy them."

The basic premise of the show could be about any number of real life successful moguls, and has been compared to Armstrong's screenplay, Murdoch, which imagined mogul Rupert Murdoch’s family gathering for his 78th birthday. The script was never produced, but did land on the 2010 Black List, a survey of the best unproduced screenplays. Forbes described Murdoch as "an intimate family drama about one of Hollywood's most powerful men," which closely resembles the end result of Succession. However, in a panel for the Television Critics Association press tour before the series debut, Armstrong stated The Roys are, "A fictional family." He continued adding, "We wanted to draw on all the good, rich stories there are about succession and about media and high politics."

Succession's return may have been a long time coming, but a family consumed with greed, money, and power doesn't happen overnight. If you're looking for a glimpse into the makings of a family-owned conglomerate overcome with dysfunction, secrets, and lies, Season 2 of Succession might fill that void.