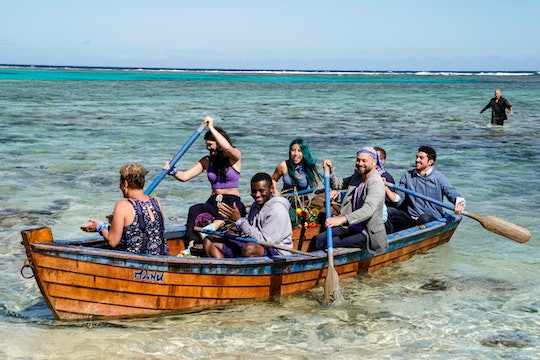 Here's How Many Episodes You Can Expect From 'Survivor: Edge Of Extinction'

Last year, Survivor filmed Ghost Island and Edge of Extinction back-to-back in the islands of Fiji, which has been their go-to production location for the past few years. But now that Edge of Extinction is about to get its winter premiere, fans may be wondering how many episodes Survivor Season 38 will have. There hasn't been official word yet on how many episodes the season contains, but CBS did announce the finale date in the press release for Season 38, so fans can make an educated guess.

Most Survivor seasons of the past ten years have been 14 episodes long, with a few 13-episode seasons and a few 15-episode ones. There are 13 weeks between Survivor: Edge of Extinction's premiere on Feb. 20 and its finale on May 15, so it looks like this season will match up with previous ones.

Since the show has filmed in Fiji for the past few years, it's had to incorporate a plot-based theme for each season, rather than relying on a new remote location and the local traditions and customs of that country to inspire the season. "Having these themes is much more descriptive and a better attractor to the mass audience I think then just naming a country," said executive producer Mark Burnett in a March interview with Entertainment Weekly. "Actually, this is one of the best productions and creative decisions you can imagine."

Edge of Extinction brings two twists. First, the show has four returning contestants from previous seasons: Joe Anglim (from Worlds Apart and Cambodia), Aubrey Bracco (from Kaôh Rōng and Game Changers), Kelley Wentworth (from San Juan del Sur and Cambodia), and David Wright (from Millennials vs. Gen X). The second, and arguably much bigger twist is that the eliminated contestants will be given the option to stay in the game, albeit on a different and much more desolate beach called Extinction Island. Extinction Island will have even fewer resources than the main beach, but, on the plus side, contestants on it won't have to participate in tribal councils or challenges.

Eliminated contestants who choose to stay on Extinction Island are also free to quit whenever they'd like. But if they do stay, they'll have two chances to reenter the game in a merger. Interestingly, the contestants playing the main game will have no idea about the existence of Extinction Island until they, themselves, are eliminated and given the chance to go there.

In an interview with The Hollywood Reporter, the show's art director Dax Pointon explained how the season's theme came to life by building out elements evocative of prehistoric beasts. Said Pointon:

With Edge of Extinction, we thought a lot about bones and large dinosaur sized animals. My mind ended up going toward a wrecked ship, with the ribs exposed, because all of the planking off the hull has been ripped off. It's a little bit of a stretch, but the metaphor is there. It looks like a beached whale, from the helicopter shots. That's where I started. A ship's ribs sticking up out of the sand gives a vibe of prehistoric extinction.

Luckily for the contestants, there won't be any actual dinosaurs on the island. But that doesn't mean the road ahead will be easy.