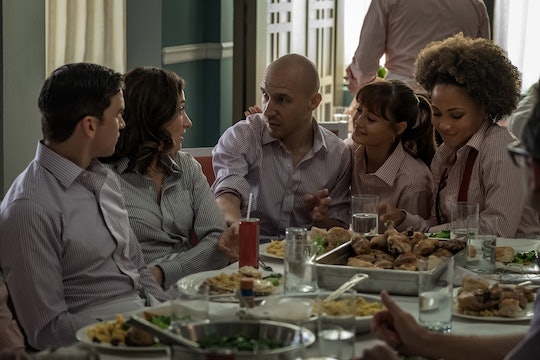 Starz Is Upping The Drama On Season 2 Of 'Sweetbitter'

Fans of the Starz drama, Sweetbitter, have been waiting for the series to return for over a year. Luckily, on Jul. 14, they’ll finally get to see how Tess (Ella Purnell) is managing life in New York City as she adjusts to her new restaurant job. With only six episodes, the first season felt awfully short, and I’m sure fans are hoping to get a more substantial installment this time around. So how many episodes is Sweetbitter Season 2?

The second season of Sweetbitter is scheduled to air with 8 episodes, as reported by Paste Magazine, with the first two dropping together on Jul. 14. Based on Stephanie Danler’s novel, Season 1 followed Tess (Ella Purnell), a young woman who moves to New York City and lands a job as a backwaiter in a bustling restaurant. Through a series of challenges, Tess manages to find love, friendship, and motivation, as she eventually earns a permanent position at the restaurant.

According to Starz, the new season will catch up with Tess, as she tries to navigate the politics involved with her new job. “Tess finds her appetite awakened,” the network synopsis reads. “She’s starving for knowledge but investing in this life means more than knowing the difference between wine from Bordeaux and Burgundy. Tess discovers that knowledge alone is not enough: she needs to be able to use it, to move from her head to her body. She needs experience.”

The synopsis describes Season 2 as an empowering journey for Tess, while the people in her life — including Simone, Jake, and Howard — seem to still be trapped by each other and the restaurant. Tess will question what she wants in life and from the restaurant, while trying to figure out what the restaurant wants from her.

In an interview with Eater, showrunners Stephanie Danler and Stu Zicherman talked about how thrilled they were to open up Tess’ life into a broader season. “We almost thought of Season 1 as a six-episode pilot,” said Zicherman. “When we came into Season 2, we were excited because it felt like we could start making the series, and the series, to us, is more expansive than just Tess. We cast all these other amazing actors and we wanted to start telling their stories. You’ll see in Season 2, virtually every episode gets into other characters, and guest stars showing up.”

Danler, whose novel the series is based on, explained that she always wanted to expand the series and tell more stories through Tess’ experiences. “I’m so proud of last season, but when I signed on to the television series, what I wanted to do was push beyond the book,” she told Eater. “I think the reason that a restaurant is such an interesting ecosystem is the number of different people you have under one roof on a given evening. When you’re introducing Tess, when you’re trying to build a heroine who’s on a serious existential journey about who she’s going to become, you don’t necessarily get to explore all those avenues, especially in only six episodes.”

Thankfully, with eight episodes ahead, the second season of Sweetbitter is longer than the first. And after over a year of waiting, fans will finally get to dive back into Tess’ world, and root for her to overcome all the new challenges that come her way.

Season 2 of Sweetbitter premieres with two new episodes on Sunday, Jul. 14 on Starz.