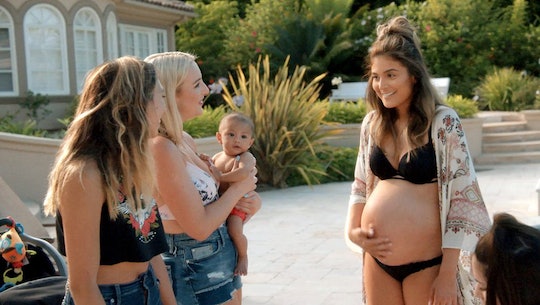 Will 'Teen Mom: Young Moms Club' Get A Full Season? This Is What's Up

Teen Mom: Young Moms Club premiered its first episode on Monday, April 22. "On the Fence," reintroduced the gang — Chandlar, Nikki, Nicole, Alyssa, Cheyenne, and new castmate Heather — to viewers and it also caught fans up to speed on their current issues.

Past episode two, there isn't a lot of information out there about the show's first season. It's possible the network is testing out the rebrand with these two episodes, or it's waiting to release more information.

If the show does decide to go forward with a full season, it's possible there will be over 10 episodes. Teen Mom 2 Season 9 is at 16 episodes, for instance, while Teen Mom OG Season 7B clocks in at 14.

Although it's not yet clear how long Teen Mom: Young Moms Club Season 1 is, it's pretty obvious some fans aren't thrilled about this new venture.

"Hey @MTV! How many episodes of the repackaged dumpster fire you're calling 'YoungMom's Club' will air before the ratings come back worse than it's initial run?" a fan tweeted. "Pathetic, sorry, terrible, fake, boring, scripted, tired.....#Stop."

As for MTV's response? The network seems confident that fans will enjoy the show if they give it a chance.

"Time to address the elephant in the room. We understand the confusion around the announcement of #YoungMomsClub. At the heart of #PrettyLittleMamas was a story of 6 moms trying to navigate life, relationships and motherhood," it tweeted. "We quickly realized that story is best told through the #TeenMom lens. You’ve seen some of their journey, but we hope that you’ll take a chance to experience the rest."

Yep, it sounds like MTV is committed to making this show work.

Chandlar is also hopeful that fans will come around, especially since she doesn't have the support of her Teen Mom co-workers. Catelynn and Tyler Baltierra for instance, tweeted their distaste for the show in early April.

"I thought coming into the Teen Mom family, they would be more welcoming, but according to Twitter, they’re not fans of us. I mean, I’m just going to leave it at. I’m pretty disappointed that the stars that I grew up watching and idolizing over the years actually turned their backs to us. It’s just a let down for me because I really liked [Tyler and Catelynn]."

It sounds like the show is on shaky ground at the moment, so it remains to be seen whether it will get a full season. Stay tuned.