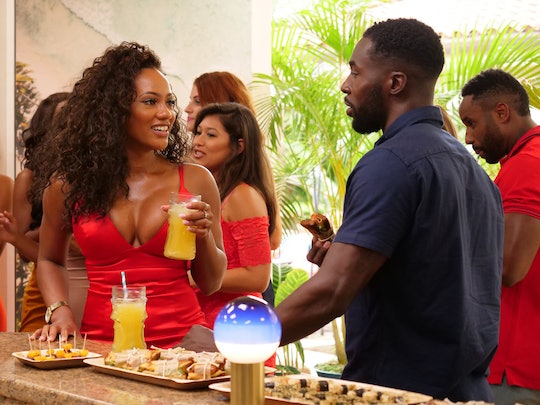 Fans Are Ready To Dive Into The Drama On 'Temptation Island'

Four couples are looking for love on the all-new reboot of Temptation Island, and with 24 sexy singles in the mix, this season is sure to be full of drama and romance. The first episode of the series aired on Jan. 15, and new episodes will air every Tuesday night on the USA Network. If the season premiere got you hooked, you might be wondering, how many episodes is Temptation Island?

Temptation Island will run as a 10-episode season, reported Deadline, and will feature a similar format as the original. This season, four couples — Shari and Javen, Evan and Kaci, Nicole and Karl, and Kady and John — are traveling to Maui to test their relationships by surrounding themselves with singles who are looking for love. Each pair is at a crossroad in their relationship, and they all hope that their time on the island helps clarify where they stand.

The couple with the longest relationship this season is Evan and Kaci. They are childhood friends who have been dating on and off for 10 years, but have spent the last five years living together exclusively. Kaci feels that it’s time for the two to get married, but Evan doesn’t think a piece of paper and a ring will make a difference. With Evan’s hesitation and pressure from her conservative family, Kaci hopes that Temptation Island will either send the two down the aisle, or give her a chance to start a life with someone new.

Shari and Javen are high school sweethearts who have been together since they were 16. The two seem like a solid couple, except for the fact that Javen cheated on Shari when he was in college. While Javen hopes to prove his love for her, Shari has reservations about his fidelity. She says that with all the temptation around him, it will be easy to see if Javen has changed his cheating ways or not. This way, she can fully trust him, and finally get over what he’s done in the past.

After meeting on the social app, Bumble, Kady and John have been dating for three years. Kady is a country girl, and John says that because he’s a “city boy” she constantly tells him that he’s not masculine enough. John is super nervous about losing her to a strong “country boy,” but Kady is optimistic that their time on Temptation Island will clarify whether or not they are really right for each other.

Nicole and Karl have the youngest relationship of the group. They have been dating ever since they met at a Chicago-area gym two-and-a-half years ago, and while they seem like a solid couple on the outside, they do have trust issues that they need to work out. Karl worries that Nicole will leave him, just like she did with her past boyfriend, and Nicole is equally as worried about Karl leaving her. They both hope that Temptation Island proves to be the next step in strengthening their relationship.

All four couples arrive on the island together, but over the 10-episode season, they will separate, mingle with sexy singles, pair off on dates, and then get back together to watch videos of what their partners have been upto. There’s no way to know which couple will make it to the end, but the drama will definitely be intriguing to watch.

New episodes of Temptation Island air on Tuesdays at 10 p.m. ET on USA.