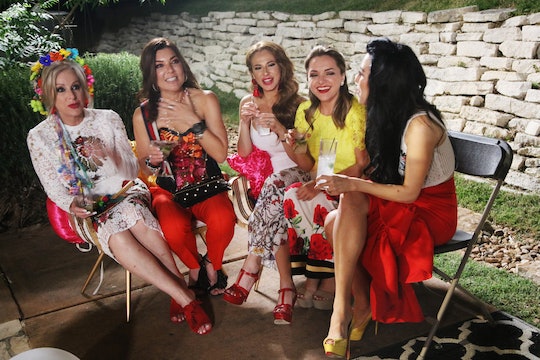 Bravo's New Reality Series 'Texicanas' Is All About Culture And Friendship

There’s a new reality show on the horizon, and it’s taking viewers down south, right into the heart of Texas. Bravo’s new series, Texicanas follows six Mexican-American women as they navigate their glamourous — and sometimes dramatic — lives with their friends and family in San Antonio. The show could easily become your next reality TV obsession, so you’ll want to know exactly how many episodes of Texicanas to expect on Bravo.

Unfortunately, Bravo hasn’t released any information on the episode count for Texicanas, but the network should update viewers on a finale date as the season progresses. If the series shares a similar schedule to the debut seasons of shows like Southern Charm and Mexican Dynasties, you could expect to see at least 10 episodes in the first season. If the show does well and is renewed, it could get longer subsequent seasons in the future.

According to a press release by Bravo, Texicanas will follow six San Antonio socialites — Penny Ayarzagoitia, Mayra Farret, Lorena Martinez, Anayancy Nolasco, Karla Ramirez, and Luz Ortiz — as they try to find balance between their bustling family and social lives. “But, it’s their shared experience of facing the ongoing challenges of American culture, while still finding ways to honor their heritage and traditions that bonds these ladies with a connection that runs deeper than friendship,” the network synopsis reads.

Unlike other shows on Bravo, Texicanas will be told from the perspective of one cast member — Penny Ayarzagoitia. In their synopsis, Bravo detailed that Ayarzagoitia will narrate the events that led to the messy discord within this group of friends, but she’ll also highlight the times they leaned on each other for support.

“It’s not all drama for these Texicanas though, displaying a true sisterhood, they lean on one another for advice and keep each other honest,” the network revealed in its press release. “Embodying the true welcoming spirit, they’ll find just about any reason to have a good time. Whether it's afternoon margaritas, poolside mariachi parties, or getting dressed to the nines for a glamourous night on the town, these women love to party Texas-style – large and loud but always including a twist of their Mexican roots…with mucho gusto!”

At first glance, Texicanas may remind you of Bravo’s Housewives series, but in an interview with Kens5, Ayarzagoitia explained how and why her show is so different. “There were a lot of rumors about the show being another Housewives, but no,” she said. “Originally, it wasn’t ever going to be a Housewives. It’s really all about culture.” She told the outlet that the series would would focus on the cast’s family, religion, and traditions, as well as their experiences adopting American culture while still trying to preserve their Mexican roots and heritage.

You can catch the premiere episode, titled “Chapter 1: Two Months Earlier” on Tuesday, May 7 at 10 p.m. ET. And the second episode, “Chapter 2 - Mind Over Matter” premieres on Tuesday, May 14, in the same time slot.