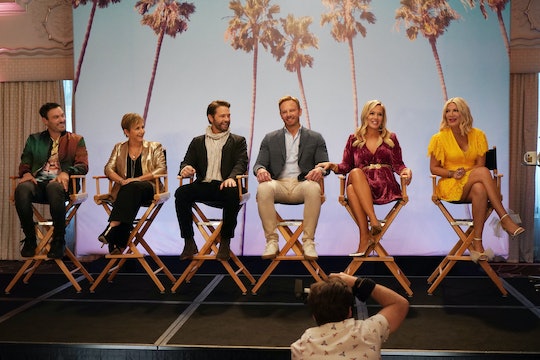 The Beverly Hills 90210 reboot on Fox is slightly different from your typical revival. Instead of reuniting the characters for all new storylines, this show takes a turn for the meta: it features the original actors playing fictionalized versions of themselves filming an in-universe 90210 reboot. It's nostalgia with a twist. And once you find out how many episodes the BH90210 reboot is, you'll know exactly how long your journey to the past will be.

Spoiler alert: it's going to be a lot shorter than the show's original 10-season run, when a single season could contain as many as 32 forty-five minute episodes. Imagine those halcyon days of the '90s when there was just so much airtime to fill! The Fox reboot will be a six-episode limited series. It doesn't sound like it'll be wearing out its welcome, but who knows? If fans go wild for it, there's always the possibility of more down the line. If this age of revivals has taught us anything, it's that a TV show is never over until it's over, but even then a streaming service might pick it up.

Six episodes gives the show just enough time to check in with the cast and characters in its brand new mockumentary format, providing a burst of late-summer amusement before it's gone again.

BH90210 brings stars Jennie Garth, Tori Spelling, Jason Priestley, Ian Ziering, Gabrielle Carteris, Brian Austin Green, and Shannen Doherty back together again on the small screen. Per an interview with the L.A. Times, the idea originally came from Spelling and Garth, who were looking for another comedy to star in together. They had previously co-starred in the short-lived series Mystery Girls on ABC Family. It was about two actresses who were on a '90s TV show together and decided to reunite to solve crimes. It was exactly as campy and yet unintentionally absurd as you are currently imagining.

"We felt like we needed something different because everyone's doing reboots," Garth told the L.A. Times, referring to BH90210. "This show was groundbreaking when it started, so we were trying to think of what could be the new version of that." In doing so, they took a note from another show in Spelling's past — her delightful-but-cancelled VH1 sitcom from 2006, So NoTORIous. In the show, Spelling played a fictionalized version of herself trying to relaunch her acting career in the wake of her 90210 fame. The same team responsible for that show, executive producers Chris Alberghini and Mike Chessler, came together for BH90210.

The revival's decision to focus on behind-the-scenes drama isn't as out of left field as it might seem at first. The original series was always knows as much for the trouble happening off-camera as the lessons of the week happening on. Doherty being allegedly difficult to work with is part of the show's legend, and a big reason why she was ousted from it after Season 4. There were also (again, I stress, alleged) romantic entanglements between the cast offscreen, on top of all the interpersonal disputes and shifting friendships.

If anything, it's a surprise it took this long for the backseat drama to start driving the story. Hopefully six episodes will be able to contain all the scandal.

More Like This
Here's How To Watch All 10 Of The Friends Thanksgiving Episodes
20 Heartwarming Episodes To Help Prepare Your Child For A New Sibling
'Virgin River' Has Wrapped Filming Season 5 & OMG Is Charmaine Still Pregnant!?
Rubble From 'PAW Patrol' Is Getting His Own Spinoff Series Full Of "Messy Demolition"