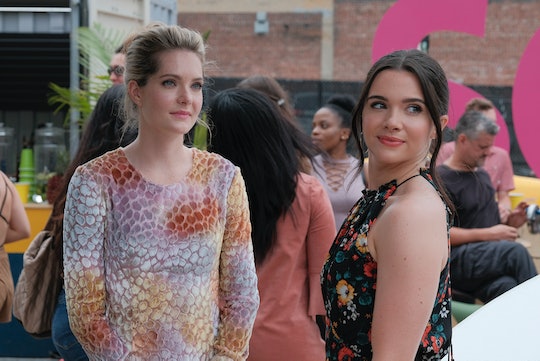 Pop the champagne! The Bold Type Season 3 premieres Tuesday, Apr. 9 on Freeform. Whenever I'm watching I want bubbly on hand because if the trailers are any indication, we're in for a lot of celebrating this year. Jane is freezing her eggs, Kat may run for office, and Sutton officially has a new (old?) boyfriend and may be starting a new career. The number of glasses I drink this spring may just depend on how many episodes The Bold Type Season 3 is. So I need answers as much as you do.

I'm crossing my fingers that fans will get answers to the biggest questions Season 2 left us with. One of them is: Will Jane please make a choice about her love life? Love triangles can be fun if they're written well (and this one is). But they have to come to an end before viewers get tired. So who will it be, Jane? Pinstripe or that other guy? (Ben, his name is Ben and he's a sweet doctor. He's just not very memorable.)

Stevens explained to ET in June why Jane gravitates toward Dr. Ben, and to be fair it makes sense. "Ben represents adults, stability, has a job that's secure, is charming and kind, and a doctor. It's a package that's wrapped in a neat little bow."

The interview happened back in Season 2 when Jane had a lot going on. Like those few weeks she didn't have a job. There is really no need to complicate life while unemployed. For Jane, Pinstripe — aka Ryan — represents the epitome of complicated. "But I think that Jane is afraid of Pinstripe," Stevens teased.

So Season 2 Jane might have been right to stay away from him in the name of self-care. But Stevens did admit one crucial tidbit about her character's feelings. "They will, without fail, always have chemistry."

She didn't stop there. "That's what's so dangerous about him, especially her being in this relationship. There's no way she doesn't still have feelings for him." Ok, I don't see the problem anymore. You have a job again. Your life is stable. So what's that phrase they say? Feel the fear and do it anyway. Consider me Team Pinstripe.

Maybe I should give Jane a break, though. She's going to start the process of freezing her eggs this season too. That's a big deal. Plus, no doubt Sutton is going to want relationship advice and career support. Kat is going to need a voice of reason when deciding whether to run for office or not. And she'll probably be a mess when Adena comes back.

All is not as quiet as I originally thought in Jane's world. But fans still deserve answers to all of their questions. Now I'm starting to wonder if 10 episodes really will be enough to cover all this drama.