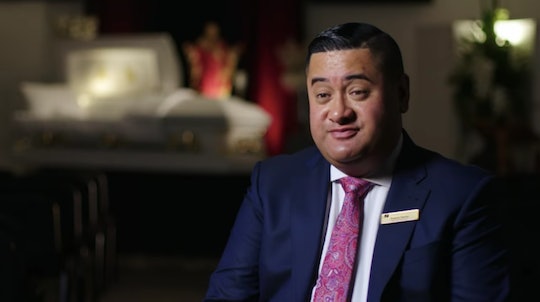 'The Casketeers' Is A Unique Netflix Reality Show

The Casketeers is a reality show from New Zealand with an unusual focus: it's about running a funeral home. Specifically, it's about the Māori funeral home Tipene Funerals in Auckland. It'll be coming to Netflix on Dec. 21 and while its subject matter might not seem like ideal Christmas viewing, it might be too intriguing not to try. But how many episodes is The Casketeers? Is it short enough that you could marathon the whole thing in one day?

The Casketeers is six episodes, which is pretty much the perfect length if you want to devote your entire night to Netflix. Despite the somberness of their business, the show is able to find comedy in it. In their review, The Spinoff explained that laughter in the face of dark times is part of what makes the show work.

Tipene Funerals is run by the husband and wife team Francis and Kaiora Tipene, though their employees are also part of the show. Their duties are near-constant, because the worst can happen at any time of day. It keeps them busy, with Francis stating bluntly, "Our job finishes when the body hits the bottom of the grave or meets the fire." Until then, there are countless details to deal with.

There are also all the typical workplace difficulties, even though the line of work is so unique. Sometimes Francis and Kaiora struggle to work together successfully; co-workers look out for each other and irritate each other in equal measure. In six episodes, viewers will get a good look at how Tipene Funerals is run and who the people are who are running it.

The show may touch on the daily absurdities of the business, but according to the NZ Herald, it's not making a joke out of loss. They reported Kaiora saying, "It's a show that sees the ups and downs of the funeral directing industry. It's a show that also highlights the sadness and hurt of the immediate family."

She said that Francis thought it was an honor that "whanau" (the Māori word for extended family, though Teara notes that it is a multi-layered term with "physical, emotional, and spiritual dimensions") allowed them to film at all. "There are no words to describe our thanks to the families and to the people, we're so lucky," Kaiora said.

The Casketeers first premiered on TVNZ (Television New Zealand) before making its way to Netflix Australia. Now you'll be able to watch it with ease on this side of the globe. And if it's something you enjoy, then soon enough you'll be able to see the show continue into Season 2. Great Southern Pictures is the production company behind the series, and their managing director Phil Smith told Stuff that Season 3 was already being planned as well. "If you can do death and comedy together, and it works, then globally you're onto a winner," Smith said. "Just look at the success of shows like Six Feet Under."

It seems like The Casketeers captures what it's like to have a truly uncommon job, as well as the rollercoaster of emotions that comes with it.