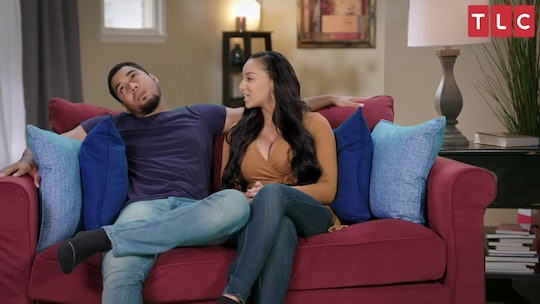 The Drama Continues For Pedro & Chantel On 'The Family Chantel'

If you were eager to see more of Pedro and Chantel after 90 Day Fiancé and its spinoff Happy Ever After? ended, then you're in for a treat. The couple returns in a series all their own called The Family Chantel that continues to explore their relationship with each other and their respective families. It will air Mondays on TLC starting on Jul. 22, but there's only one downside: it's not clear yet how many episodes The Family Chantel is.

Though TLC has shared all kinds of intriguing details about the upcoming series, the network hasn't announced the exact episode count. Considering The Family Chantel was spawned from 90 Day Fiancé, it's possible that it will follow a similar format. The original series, where Pedro and Chantel were first introduced, tends to have 12 to 14 episodes in a season. If The Family Chantel takes a note from its parent series, then the same may be true of it.

That sounds like just enough episodes to contain all the drama inherent in the show's premise. Things have been rocky between Chantel and Pedro's families since day one, and they may need a full 13-episode run to smooth over all those bumps in the road.

According to the TLC website, Chantel's parents Karen and Thomas will be a part of the show, as will her siblings River and Winter. But don't worry about Pedro having no one in his corner; his mom Lidia and sister Nicole will be taking part, too. A trailer for the season shows Pedro actively trying to bring his mom and sister to live in the United States permanently. But before that can happen, he returns to the Dominican Republic with Chantel and her entire family to see his ill grandmother. I doubt this comes as much of a surprise, but it doesn't appear to be a visit full of loving family connections.

Instead, the trailer reveals argument after argument. Karen is evidently not a fan of Chantel's in-laws, and the feeling is mutual. During one fight, Nicole announces that Chantel's family is horrible, while Lidia shouts about them inviting her children to their home only to "assault" them. The tension between their families only creates more friction between Pedro and Chantel. As though they needed an opportunity for more! At one point in the trailer, Chantel loses her temper and throws a drink at a woman Pedro once danced with. That confirms that drama follows this pair wherever they go.

But they're not the only ones dealing with relationship problems. Chantel's sister River gets in on the arguing, too. Despite the fact that she's been dating Jah for five years, the family still considers him a mystery. Uncovering more about him seems to lead to tears and heartbreak.

The Family Chantel appears to deliver on everything fans might expect after first meeting Pedro and Chantel on 90 Day Fiancé. With everything going on in the trailer, I can only assume that there was enough material to last for quite a few episodes, even if the exact number remains unrevealed.