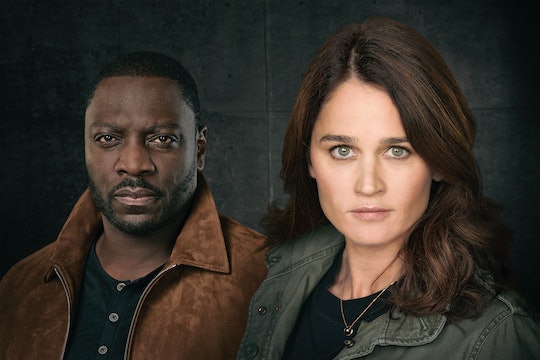 ABC’s new series, The Fix, has everything you’d want from a thrilling legal drama. It is centered around a famous star whose high-profile murder case brings a defeated prosecutor back into the spotlight. The series — which premieres on Mar. 18 — is a multi-layered mystery, with tons of clues for viewers to unpack week to week. But exactly how many episodes is The Fix?

According to ABC, The Fix will air as a 10-episode event, with new episodes dropping every Monday at 10 p.m. ET. The show was created by former Los Angeles prosecutor, Marcia Clark, (who is co-writer and executive producer) and features some similarities from her life. Clark was the lead prosecutor in the 1995 double murder trial of O.J. Simpson, in which he was infamously acquitted for the murder of his ex-wife Nicole Brown Simpson and her friend, Ron Goldman.

The Fix tells the story of a Los Angeles district attorney, Maya Travis (Robin Tunney) who fails to prosecute a Hollywood star, Sevvy Johnson (Adewale Akinnuoye-Agbaje), for a double murder. The high-profile case thrusts Maya into the spotlight, but when Sevvy is acquitted, her career gets derailed. She moves to rural Washington to settle down into a quiet life away from public scrutiny, but after eight years, when Sevvy’s girlfriend is found stabbed to death, Maya comes back to the D.A.’s office and tries to bring him to justice once again.

Clark told Decider that she used her experiences from the Simpson trial as an inspirational springboard, because it was something people could identify with easily. However, she noted that the characters and story on the show are purely fictional, so viewers won’t be able to guess the ending. “You know it’s easy when you’re just attached to something that people are familiar with,” said Clark. “They get it right away. And then you take it, you start to run with it. — You do not know how this one ends, unlike that other one. So I think you’re really surprised what happens with all these characters.”

These first ten episodes of The Fix will tell a self-contained story, from beginning to end, Clark explained in an interview with Access. She said that each subsequent season will tell a new story inspired by famous events, but will similarly spin those stories in a fictional direction. “So we wanted to set the table in a way that would immediately tell the audience ‘This is where we are and this is who we are,’ and it would be a recognizable thing which is something we intend to do in every season,” she told the outlet. “We are going to have recognizable people that are taken in very different directions than the real world took them.”

Luckily, with a contained story for the first season, fans will get all the answers they need in just 10 episodes. And they won’t have to worry about cliffhangers and the anxiety that comes with waiting for the next season. The Fix premieres on Monday, Mar. 18 at 10 p.m. ET on ABC.