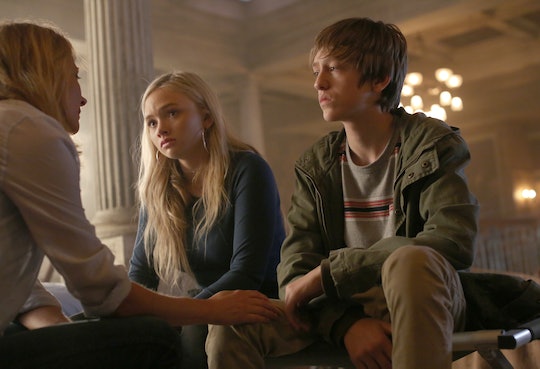 'The Gifted' May Just Be Your Newest Marvel Obsession

As the Marvel Cinematic Universe continues to grow, more and more of your favorite superheroes, and some you may not know, are coming to the small screen. While the MCU has mostly lived its small screen life on ABC and Netflix, FOX is now throwing its hat into the ring. On Monday night, the network will premiere The Gifted, a show about a family who must go on the run after it's discovered that the two teen children are mutants. So how many episodes is The Gifted? You'll being getting a very interesting look into the world of X-Men.

Though the series is set in the same world as the X-Men, don't expect to see Wolverine, Storm, or Professor X dropping in any time soon. As stated, this show is all about a family, the Struckers, to be specific. Reed Strucker (Stephen Moyer), the father, prosecutes mutants for a living only to discover that his own son and daughter are mutants. Things, of course, get complicated quickly when it's revealed that the two teens are the things he's supposed to side against.

Naturally, the family decides it's best to go on the run than try to reason with the people Reed works for. Thus, they begin their journey to attempt to find safety and end up working with other mutants who are also on the run.

The show, which has nabbed a 10-episode arc for its first season, stars Amy Acker as Kate Strucker, the mom; Natalie Alyn Lind as Lauren Strucker; and Percy Hynes White as Andy Strucker. Also starring in the series are Emma Dumont as Lorna Dane/Polaris, Jamie Chung as Blink, Sean Teale as Marcos Diaz/Eclipse, and Blair Redford as John Proudstar/Thunderbird.

In this world, these mutants aren't the superheroes fans are used to seeing on the big screen. They're the mutants that are just trying to survive. Unsure of whether or not the X-Men, or the Brotherhood, still exist, they believe they're all on their own and thus must band together and protect themselves.

Though The Gifted probably won't include any X-Men, some fans are wondering if there will ever be a Legion crossover. The FX series aired it's first season earlier this year and has already been renewed for the second. Similar to The Gifted, although it doesn't star any of the characters in the X-Men film series, it is connected to them. Legion follows Haller, a mutant who was diagnosed with schizophrenia at a young age. Since FX is owned by FOX, some people think a crossover is inevitable and could be really interesting to see as the Legion world is much more mind-boggling than the every day world The Gifted seems to be set in.

If there were to be a crossover, it wouldn't happen in The Gifted's first season, so hopefully it does well enough to get renewed. Thus far, the reviews of the new series have been mostly positive, which is a good sign. NPR noted that the show is "off to a hugely promising start, and well worth watching." Similarly, Uproxx gave the show minimal praise, stating "The Gifted is much better than Inhumans, but it's not nearly as good as Legion." Inhumans is another new Marvel series that premiered last week on ABC.

So although critics aren't exactly singing the show's praises just yet, it definitely has potential. Based on the trailer, it's clear the series will be filled with action and have a heartwarming family touch. Even if you're not 100 percent certain you'll love it, I'd recommend giving the new series a chance. You never know, it could end up really surprising you.