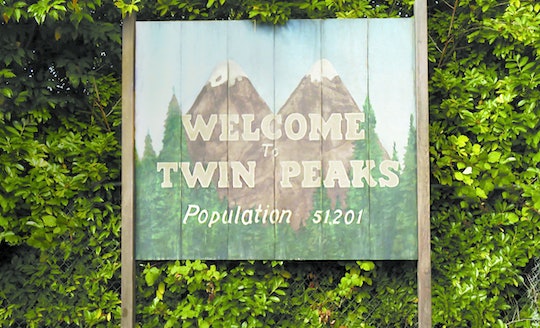 The 'Twin Peaks' Revival Will Take Fans On Quite A Journey

Fact: We live in an age of revivals and reboots. Between seemingly endless superhero franchise reboots and the resurrections of beloved shows years after they've ended, fans obviously love returning to some of their favorite movies and TV series. The success of Netflix's much-hyped Gilmore Girls miniseries revival, the excitement over the recently-announced Roseanne reboot, and the anticipation surrounding the upcoming new Will & Grace season all prove that point. Twin Peaks is one of the most recent shows to get the revival treatment, leading many to wonder: How many episodes is the Twin Peaks revival?

More Like This
Exclusive: Cookie Monster Puppeteer Tells Us Why Kids Will Love His New Show Donkey Hodie
Josh Duggar's Family Has Spoken Out As He Faces Child Pornography Charges
Queen Elizabeth Has Given Her Royal Approval For A New Line Of Beer
Samira Wiley & Lauren Morelli Announced They Welcomed A Baby Girl

The upcoming Twin Peaks series is 18 episodes long, and the season has an unusual rollout for traditional TV. The first two episodes will air as a two-hour premiere on Sunday, May 21, and immediately after, the next two episodes will be made available digitally. After that, the season will unfold weekly, as per Showtime's standard. Interestingly, the revival was initially set to be only nine episodes, but was later increased to 18 by Showtime.

For those of us who are fans of David Lynch's eccentric, groundbreaking series, more is always a good thing, especially since Lynch himself is at the helm once again. Season 2 admittedly got a little weird, after the big "Who Killed Laura Palmer?" reveal happened midway through the season at the network's insistence, and Lynch's direct involvement declined.

This star-studded Twin Peaks revival has been a long time coming, but it's been a rocky road to get here. The original series aired from 1990-1991 on ABC. According to Esquire, the idea for the series continuation had been bandied about since August 2012 by Lynch and co-creator Mark Frost. The Showtime revival was officially announced in 2014, at which point it was intended to be a nine-episode season airing in 2016, to coincide with the 25th anniversary of the end of the show. And, of course, to also coincide with this iconic Laura Palmer moment:

Unfortunately, it wasn't all smooth sailing from the initial announcement to the upcoming May 21 premiere. In 2015, Lynch was in a salary dispute with Showtime over the revival. Luckily, the dispute was resolved soon after (at which point the episode order increased), and the premiere was pushed back to 2017.

For fans of the original series who need a refresher (or for newcomers who want to watch but aren't interested in binging the 30 hours of the first two seasons beforehand), one of Showtime's most recent promos gives a pretty solid overview of what the one-of-a-kind series is about:

Of course, my recommendation is that you binge the first two seasons ASAP. The promo might be good, but it doesn't remotely compare to the unmatched experience of watching the full series (yes, even the strange Season 2 episodes).