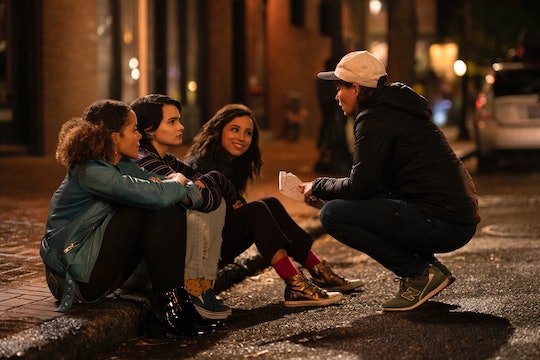 'Trinkets' Is Going To Become Your New Netflix Obsession

Trinkets, the latest teen drama to hit Netflix, tells the story of three young women who form a connection after meeting at a Shoplifters Anonymous meeting. As it does with most series, Netflix dropped the entire season at once, which means you’ll probably spent most of the weekend watching it. But, if you’re hoping to schedule it out over the next few days, you might be wondering, how many episodes is Trinkets?

The series debuted with a 10-episode season, which is currently streaming on Netflix. Based on Kirsten “Kiwi” Smith's 2013 novel of the same name, Trinkets follows three high school teens — Elodie (Brianna Hildebrand), Moe (Kiana Madeira), and Tabitha (Quintessa Swindell) — who bond over their shoplifting addiction and the emotional pain in their past. While they don’t have much else in common, the three kleptomaniacs find strength and solace in each other, and together, they navigate family issues and the hurdles of high school.

When talking to the Script Joint, Smith — who is known for writing rom-coms like Legally Blonde, 10 Things I Hate About You, and She’s the Man — revealed what inspired her to write this unique story. "For years I'd wanted to write a movie about a group of girls who meet in Shoplifter's Anonymous and decide to plan a heist,” she told the outlet. “It kind of floundered around in various different screenplay iterations, then I pitched my publisher the idea as a book, and they loved it. I proceeded to write a draft of it…and realized how much I sucked at plotting a heist. I was much more comfortable in relationship comedy/drama territory, so I modeled it more in the Breakfast Club vein, and thus it became Trinkets, a novel about a group of girls who meet in Shoplifter's Anonymous and through their unlikely friendship, end up changing each other's lives for the better.”

Smith, who also serves as the series’ executive producer, told Hollywood Life that because she was used to writing movies, developing a 10-episode series was slightly difficult at first. “It was crazy,” she said. “Because it’s just with a movie you can chill in your underwear and take your time. With TV, there’s a lot of aggressive deadlines that you have to be very responsible and meet all of that because it’s not just you in your skivvies dreaming up a movie. It’s a lot of people involved.” However, she noted that with the help of her writing team, she was able to craft out the seasons’ outline and story arc.

Smith also told the outlet that the 10-episode season doesn’t cover the entirety of her novel, leaving the door to a potential second season open. “There are a few things left in the book, a few different paths that we took in the show that left some characters behind from the book that we might pull into future stories if we have the opportunity to do so,” she explained. “We have a lot of stories to tell, so if we’re so fortunate to get that, we’re armed and ready to go. I can live with these characters for a long time.”

Netflix hasn’t confirmed a second season for Trinkets, but as the series’ creator and executive producer, Smith is ready to take these teens’ storylines even further. Ultimately, the decision lies with Netflix. If the show does well, in terms of viewership and buzz, the streamer will likely bring it back for Season 2. And if it does, that means you’ll get a whole new batch of episodes to watch sometime next year.