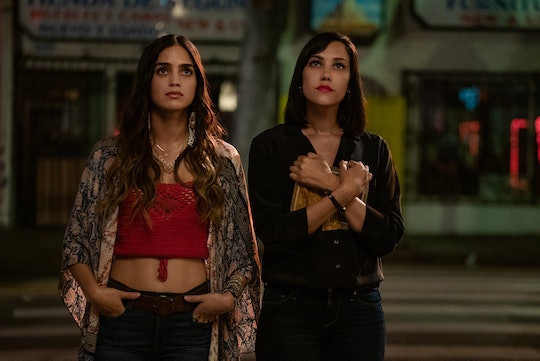 The Hernandez Sisters Are ~Finally~ Back In 'Vida' Season 2

For Starz, Vida is a show that grew a following after a slow start. The first season was only six episodes, so fans might wonder — how many episodes is Vida Season 2?

I have great news for you! According to Forbes and Deadline, when Vida announced the premiere date for Season 2, it was also announced that the season will be a total of 10 episodes. That's a full order for prestige TV, which is all any fan can ask. Episodes of the show are just a half hour, so it will still go by fast. But quality over quantity is a rule that I believe holds true for all TV shows.

The show premiered online Thursday, May 23, and will premiere on the network three days later on Sunday, May 26. As for what to expect from the story this season, the Hernandez sisters are trying to rebuild their mismanaged family business, which they own in the barrio they grew up in, in east LA. But going back home is hard, especially when you returned because of a tragedy. The sisters are still grieving the loss of their mother Vida, but childhood trauma is also revisiting them. Plus, seeing old friends means old conflicts will come to the surface.

Series creator Tanya Saracho also tackles themes like spiritual identity, class, and sexual orientation on the show, and what it means to explore those parts of your identity as a Latinx. There is not one way to be Latinx, a fact the show addresses while attempting to break down stereotypes along the way. “The show has so many types of Latinx people, and I think that's just a good thing to portray because usually we're portrayed as of one thing only or, you know, the stereotypes,” Melissa Barrera — who plays sister Lyn Hernandez — told NBC news.

The show made a strong commitment to diversity behind the scenes this season, too. Chelsea Rendon, who plays Mari, told NBC News that the crew is "all-female and Latina directors, and our writer's room being all brown." Representation like this within a show's crew is so rare, and it can be even harder for women and people of color to get writing and directing jobs on TV than acting roles.

These statistics are disheartening. But Vida is walking the walk for Starz — and representation everywhere makes for more authentic stories. I can't wait to see what's in store for the Hernandez sisters and I'm so glad we get 10 episodes to find out.