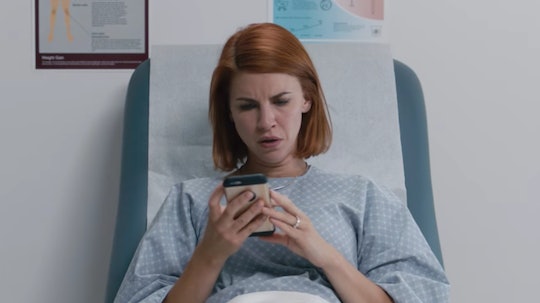 On Feb. 22, Netflix will be welcoming a new comedy called Workin' Moms. The show focuses on a group of moms who have to balance their family responsibilities with their careers outside the home. If that sounds like your kind of thing, then you're going to want to be ready to watch as soon as the series drops. And knowing how many episodes Workin' Moms is lets you plan the perfect marathon down to the minute.

While the show might be brand new to international audiences, Canadian viewers may be more familiar with it. Workin' Moms has been airing on CBC Television since 2017; its third season premiered on Jan. 10 of this year and is still ongoing. That means that 31 episodes have aired in total on Canadian television, but Netflix subscribers won't be getting the entire series at once. Instead, only the 13 episodes of Season 1 will be yours to enjoy by the end of February.

And if you like the show, then you don't have to fret about it being renewed or not, because you're already guaranteed another season and then some. It's not clear yet when the rest of the seasons will migrate to Netflix, but they shouldn't be far behind Season 1.

Series creator and star Catherine Reitman revealed the Netflix news on Twitter with a celebratory video. The announcement was intercut with shots of her and her co-stars Dani Kind and Juno Rinaldi dancing around the office with joyous abandon. Reitman concluded by reminding those in Canada, a.k.a. "the motherland," that the first two seasons of the show were still streaming on CBC Gem and Netflix Canada. Try not to be too jealous, global viewers. Those of us in the rest of the world will hopefully get Season 2 soon enough.

Workin' Moms follows four women: Kate (Reitman), Anne (Kind), Frankie (Rinaldi), and Jenny (Jessalyn Wanlim). Anne is described by Distractify as a matter-of-fact psychiatrist who can edge into ruthlessness. Frankie is a real estate agent struggling to stay connected to her wife after their daughter is born. Jenny finds it hard to return to work after her maternity leave ends, especially since she has to be the breadwinner for the family. And Kate has a lot of Reitman in her, because she utilized some of her own experiences when crafting the show.

In an interview with Chatelaine, Reitman spoke about her inspiration for the series. Just six weeks after the birth of her eldest son, she had to go to Philadelphia to shoot a film. It caused her to miss her first Mother's Day. She said that she was in "such a hormonal cloud" that it caused an avalanche of emotions, including "guilt and shame and loss and total lack of identity." She called her husband Philip Sternberg (who would later go on to executive produce and co-star on Workin' Moms as Kate's husband Nathan) and he told her that she should put her feelings into her work by writing about them.

Thus Workin' Moms was born as an honest, funny, sometimes uncomfortable look at being a modern mom with a lot on her plate.