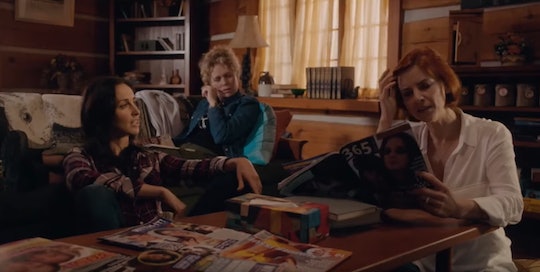 I'm Totally Ready To Dive Into Season 3 Of 'Workin' Moms'

Kate (Catherine Reitman), Anne (Dani Kind), and Frankie (Juno Rinaldi) are back in a new season of Workin' Moms. The show follows this group of thirty-something moms, who are trying their best to balance motherhood, friendship, and their professional lives. If you’re planning to dive back into their story, you may be wondering how many episodes Workin' Moms Season 3 is and when it will be available to watch.

The 13-episode third season premiered on Thursday, Aug. 29 on Netflix. The last time viewers saw Kate, she had just learned she was pregnant, and also found out her husband Nathan (Philip Sternberg) was cheating on her with their nanny, Renya (Jess Salgueiro). After dealing with so many blows, It will be interesting to see how Kate moves forward and handles parenting two kids, while she manages her relationship with Nathan, and opens up her new public relations firm in Season 3.

In an interview with TV, eh?, series creator and actress Catherine Reitman talked about how and why Kate’s life was such a mess in Season 2, as she dealt with her pregnancy, Nathan’s infidelity, the death of her father, losing two jobs, and her fallout with Anne. “Kate, whether we like to admit it not, had both feet, head, arms, legs, breasts, her whole body out the door this entire season,” she said. “She hasn’t been on the same page as her husband and there are consequences to that. I don’t think she asked for this and I don’t think she deserves this.”

Reitman adds that in her own “quest to have it all,” she works long hours and gives the rest of her time to her children, and her marriage often suffers for it. “Luckily, Philip (Reitman’s husband) is in the same game as me,” she told the outlet. “For most couples, the pressure to keep things alive … f— sex, just staying emotionally connected is so much responsibility. As a showrunner, I knew the audience wouldn’t see that coming. It is a really effective gut punch. But, if you go back over the season, we planted so many seeds to show this coming.”

Kate is going to make some major life changes in Season 3, and when talking to Yummy Mummy Club, Reitman revealed that her character will be forced to come to terms with everything that’s happened to her. “It’s eye opening when your world falls apart,” she said. “Witnessing what she thought was the most stable thing in her life is not stable is going to push her out of her comfort zone — Kate is going it alone, she is starting from scratch. She is starting a new business and has a new baby and she is facing it alone.”

The great thing about Workin' Moms is that it really captures the daily balancing act working mothers deal with. And I’m sure Season 3 will continue to show how this group of moms redefines motherhood in their own way, on their own terms, while still keeping things fresh and funny.

Season 3 of Workin' Moms is currently streaming on Netflix.

More Like This
'Workin' Moms' Has An Official Release Date For Its Final Season
'Wednesday' Creators Say They're "Talking Amongst Ourselves About Season 2
'Virgin River' Has Wrapped Filming Season 5 & OMG Is Charmaine Still Pregnant!?
Here's How To Watch All 10 Of The Friends Thanksgiving Episodes