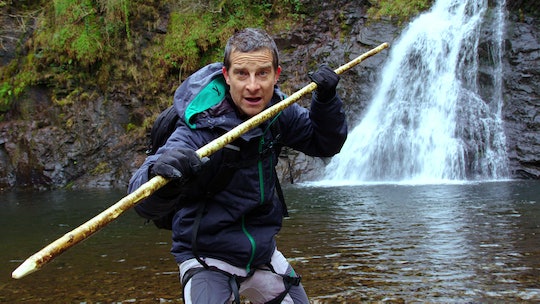 Netflix is taking "choose your own adventure" storytelling to the extreme with Bear Grylls — everyone's favorite adventure seeker, survivalist, and former Trooper in the UK Special Forces Reserve. You can experience Grylls' latest adventures in a way you've never seen before. This time, you decide if Grylls jumps off that cliff or climbs up to face the mountain lion; if he climbs the tree or follows the sound of the monkeys. You get the point. But it begs the question: how many episodes is You Vs. Wild on Netflix? It's hard to believe anyone — even Grylls — could film too many episodes like that at one time.

Season 1 of You Vs. Wild is just eight episodes, but Grylls packs tons of adventure into those shows — which are each about 20 minutes long. The short episodes are all (of course) filled with challenges I'd never dream of, myself, and every step of Grylls' adventure is meticulously planned, which enhances the interactive experience for fans — and was new for him, too. As Grylls explained to The Wrap, "So many of [the choices] took me to a survival disaster situation that was entirely new and that’s the fun part — with a detailed plan we could create some pretty crazy scenarios for viewers to have to figure out…"

So, it might be fun to pick the more extreme choice between two particular options, but the goal of the show isn't for you to put Grylls in any unexpected danger. Spoiler alert: filming is done and he's fine. He's a pro at surviving.

It turns out this is more of a logic game. You're picking the best options and deciding which one you'd rather watch. It's natural that you're probably going to pick the most dangerous option — and they won't disappoint. Grylls does come close to death a few times. But the most difficult scenario for him to film might surprise you. It doesn't involve an interaction with a wild animal or a volcano. It's Grylls versus a lake. He told The Wrap that trying to figure out different ways in an out of a frozen lake was the most difficult challenge for him.

Interactive TV is an emerging genre and a new one for me, but Netflix has been pushing its boundaries for a while now. The first interactive content the network produced for adults was the standalone movie special Black Mirror: Bandersnatch. At the announcement for You Vs. Wild Netflix's VP of product talked about the network's leap into a new type of content. “We didn’t know how it would go,” he said. “The internet exploded with conversation and delight."

That cleared the way for You Vs. Wild and Grylls is thrilled to put his safety on the line for your entertainment. In a statement announcing the show he said, “I’m so proud to deliver this first-of-its-kind live-action interactive series, really giving viewers an all access pass to explore the world and its landscapes in my boots. “The stakes are high in this one!”

So what are you waiting for? You could be choosing what species of worm to watch him eat right now!