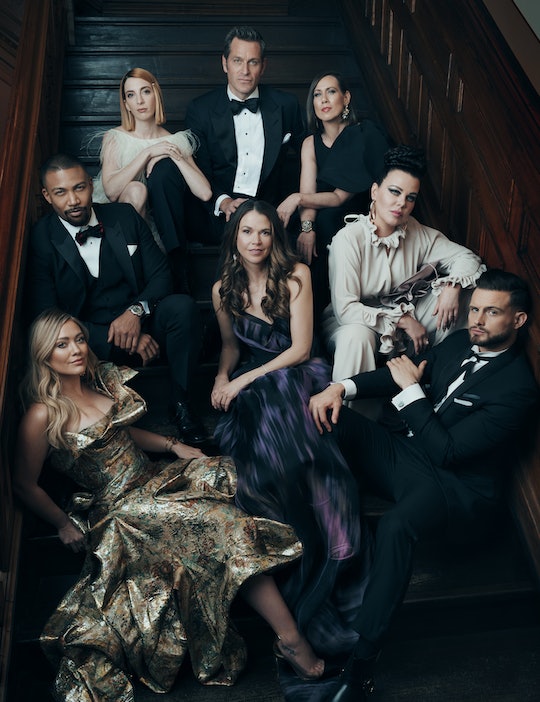 Liza & Kelsey Are Seeing Big Changes In Season 6 Of 'Younger'

It’s been a while since fans saw Liza, Kelsey, Charles navigate their competitive world of publishing. But luckily, a brand new season of Younger premieres on Jun. 12 and it’s bringing back all the romance and drama fans love. Some viewers are trying to gauge how much time they’ll get with their favorite characters this time around, so how many episodes in Younger Season 6?

Just like past years, Season 6 of Younger will air with a total of 12 episodes. In a press release, TV Land revealed that the upcoming season will follow Kelsey (Hillary Duff) as she embraces her new role as publisher at Millenial Print, while Charles (Peter Hermann) and Liza (Sutton Foster) try to adjust to their new normal since Charles is no longer the boss. Laura Benanti, Phoebe Dynevor, Michael Urie and Chris Tardio are set to return this season, and Empire actress Nicole Ari Parker will play Maggie's (Debi Mazar) love interest.

When talking to Parade, Hillary Duff and Sutton Foster talked about how their characters will fare with all the change they face in Season 6. “Truthfully, this is the first season Kelsey is struggling and feeling really insecure,” said Duff. “That’s a theme throughout the season, her feeling that she’s not enough and that she’s been set up to fail. She’s a fighter but this might be beyond what she can handle.”

Foster explained that her character, Liza, and Diana (Miriam Shor) will be supportive of Kelsey, and together the three women will be a force to be reckoned with. “Liza is positive at work and she’s a hopeful optimist,” said Foster. “Plus, Liza feels like she’s made it: She now has an office with a door — It feels like the three of us are in this together even though we’re carrying a half-sinking ship. It feels like we’re this incredible team of women who are definitely in charge.”

In an interview with The Hollywood Reporter, series writer-producer Darren Star revealed that while Season 6 will follow friendships and romantic relationships, it will highlight more of the professional difficulties the characters face. “The characters are operating at the top of their game,” he told the outlet. “I think [the new season] it’s more grounded, in that the lie is not what is driving all these stories. It becomes so much about what it’s like to be in a relationship where you’re working in the same business, and there are things with Charles and his business that come into conflict with Liza.”

The showrunner also revealed that the new season would be full of comedy and fun as well, and for those fans worried about the future of Younger, he had some optimistic words. “We decided not to make this a series ender, for sure,” said Starr. “As long as we have this really wonderful cast and we still have stories to tell, I definitely feel like we have another season ahead of us.”