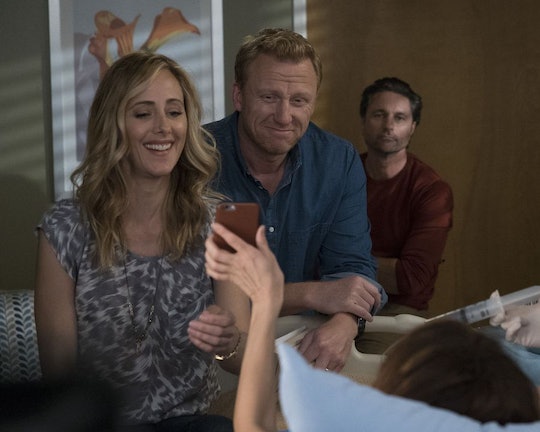 Teddy Is Scrubbing Back Into 'Grey's Anatomy'

The new season of Grey's Anatomy is finally here and with it comes a familiar face. During Season 13, Amelia took a phone call with Dr. Teddy Altman, who starred on the show from Seasons 6-8. The one phone call sent fans into a tizzy, excited to hear from a doctor who hasn't been on the show in years. Well, now there's even better news for fans. Teddy will actually be scrubbing back in this fall in the flesh. But how many episodes of Grey's Anatomy will Teddy be in during Season 14? It's difficult to know for sure, but this won't be a one and done situation. She'll stick around for a little while.

Deadline first reported the news back in June that Kim Raver, who plays the character, would be returning to the show for a guest arc in Season 14. Though it hasn't been stated how long that arc will be, she's listed as appearing in three episodes of Grey's this season on IMDB. Teddy's return shouldn't be all that surprising to viewers. When Teddy left the hospital after Season 8 it was to take a dream chief job at a hospital in Germany. It was this hospital where Owen's long lost sister, Megan, was first brought to, hence why Amelia was speaking with her on the phone at the end of Season 13.

Teddy and Owen were close friends for years, so it'd make sense that Teddy would come back to Seattle with Owen's sister. However, some fans wonder if Teddy's return could mean even more trouble for Amelia and Owen.

Last season, Amelia and Owen separated after Amelia struggled to explain why she didn't want to have kids and Owen struggled to be there for her. Although Amelia remained by his side as he tried to reconcile the fact that his sister was actually alive and returning home towards the end of the season, that doesn't mean everything will be magically fixed between Amelia and Owen. Now, with the return of Teddy, it definitely seems like things will only get more complicated.

Though Teddy and Owen never actually had a romance, there were definitely romantic feelings there. Teddy was always in love with Owen, however, he was always in love with someone else. When he first invited her to work at the hospital as the Chief of Cardio she had hoped it was going to be the start of their relationship, only to find out he hired her as a gift to his then girlfriend, Cristina Yang. Ouch!

Teddy tried to push past those feelings, but she inevitably ended up telling him how she really felt. Briefly, Owen seemed to return those feelings and had to choose between Teddy and Cristina. His choice was made during the hospital shooting, when he went back inside to find Cristina, leaving Teddy behind. After that, the two agreed to be just friends and Cristina and Owen got married while Teddy later married Henry, who, unfortunately, died shortly thereafter.

It's totally possibly that Teddy has moved on while she's been working in Germany, and for all we know, she could now be happily married and maybe even have kids. However, it's also just as likely that she's still single and now that Owen and Amelia seem to be heading towards a divorce, this could finally be her shot at love with Owen. Though many fans would prefer Cristina returned so that she and Owen could get back together, others may love the idea of Teddy and Owen becoming a couple. The pair have always been close and their friendship was admired by many. Plus, if they did get together it'd mean Teddy was sticking around for good.

You can find out more about Teddy's return during the season premiere of Grey's Anatomy on Thursday tonight at 8 p.m. EST.