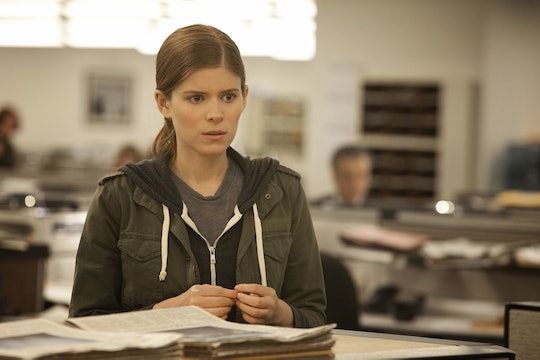 How Many Episodes Of 'House Of Cards' Season 4 Is Kate Mara In? Zoe Barnes' Appearance Is Quick & Powerful

(Warning: This post contains major spoilers from Episode 6 on of House of Cards Season 4.) She's back, and the timing couldn't be better. In a true kick-him-while-he's-down moment, Zoe Barnes returns to House of Cards and taunts Frank Underwood while he's in a medically-induced nightmare. Her appearance is completely unexpected, yet perfect, because Frank's been a bad guy lately and needs to be put in his place. And who better to do that then the ghost of someone you've killed? But how long are these nightmares going to last, and how many episodes of House of Cards Season 4 is Kate Mara set to be in?

After being shot in the abdomen by Lucas Goodwin, Episode 6 features Frank barely holding on to his life. He's in need of a liver transplant — positioned second on the donor list — but almost dies before successfully getting a new liver. In the moments before Frank is about to die, he slips into a hallucination where he imagines all of the people he's killed in the past three seasons. Zoe, of course, is one of them.

This time around, Zoe appears to be more of a Claire than a Zoe. Her hair is short — in defense of the show, Kate Mara has a similar 'do as Claire — and her dress is very First Lady. Also just like the First Lady, Zoe oozes power. Without saying anything, Zoe's power conquers Frank's power, clearly scaring him before she gouges his eyes out — a similar nightmare he has had about Claire, too.

So, yeah. Zoe is awesome in her return to House of Cards. But, that doesn't necessarily mean she's going to come back time and time again for my personal pleasure. In fact, Kate Mara is only in the one episode of House of Cards Season 4. Just the one! Instead of making her ghost appear in more dreams of Frank's, writers only capitalized on one Zoe Barnes appearance.

Although we could be sad about the lack of Zoe in Season 4, we should be appreciative that we at least got a little Zoe Barnes. Considering she has been dead for two seasons, any appearance is welcomed by me. Let's just hope she isn't a stranger to us for another two seasons — I can take the "comes to us in ghost form," but I can't get behind the "wait two years" to see her again thing.