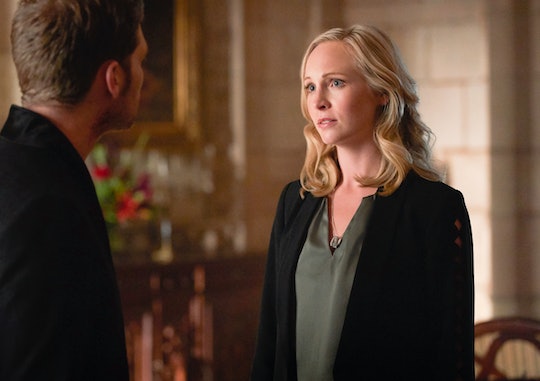 Caroline's Time On 'The Originals' May Be Longer Than You Think

It shouldn't be all that surprising that the final season of The Originals will include a number of familiar faces. One of those faces belongs to Caroline Forbes, a longtime love interest for Klaus. With the final season now on the horizon many fans are wondering just how many episodes of The Originals is Caroline in? Thankfully, it won't be a one-and-done type of thing.

Showrunner Julie Plec has been pretty quiet on the exact number of episodes Caroline will be in, which may be because she doesn't want fans to figure out if Caroline will be there for the series finale. During a Twitter Q&A session last year, Plec only confirmed that fans will see Caroline "several times over the season."

Plec also added that Caroline and Klaus will have "some really interesting convos about their past dynamic and attraction." This will be in relation to the fact that Klaus' daughter, Hope, will apparently have a crush on a "bad boy" this season, something Caroline is quite familiar with. With these discussions, Caroline will reveal what drew her to Klaus when she was a teen. Hopefully, this conversation will also draw them back together again.

The cast and crew have been understandably quiet about what exactly this reunion between Klaus and Caroline will bring, but last year, Candice King, who plays Caroline, did tell Us Weekly that "Klaroline fans will be very happy." However, don't get too excited. That doesn't necessarily been these two will end the series together.

During an interview with TV Guide, Plec refused to say where the relationship with Klaus and Caroline is headed but did tease that the pair has a "nice relationship... because Caroline is one of the few people outside of Klaus' family that can actually speak a straight truth to him, and he needs that." Plec also added that the two have a "friendship of honesty and little bit of antagonism and some pretty good advice."

Additionally, in the same interview, Joseph Morgan (who plays Klaus) added that while he doesn't believe everyone will be satisfied by where Klaus and Caroline end up, he's pleased with their ending and hopes it "pays tribute to the investment that people have made in them."

It has certainly been a big investment for fans who first fell in love with the idea of Klaus and Caroline during the third season of The Vampire Diaries. Understandably, Caroline hated Klaus at first for a number of reasons, the main one being he was controlling her boyfriend, Tyler, through the sire bond. However, over time the attraction between them only grew and after Caroline and Tyler broke up, she and Klaus had a brief hook-up when he returned to Mystic Falls in the 100th episode of TVD.

Since then, the two haven't had too much interaction. Caroline stayed in Mystic Falls while Klaus found himself in various forms of trouble in New Orleans. That being said, Plec has certainly given fans reasons to still believe in this couple. Like that time Klaus showed up for Caroline's graduation or when he called Caroline after her mother's death. And no one can forget the letter he wrote her in The Vampire Diaries season finale.

However, Caroline's appearance in the final season of The Originals is the first time she's fully crossed over to the series, so it makes sense that fans are beyond excited to see these two come face-to-face once again. After everything Caroline and Klaus have been through, it would be nice if they were able to live happily ever after together, but knowing Plec, it's probably best not to get your hopes up. She's been know to break fans' hearts before. Instead, just enjoy this reunion and get ready for some fun Klaroline banter.