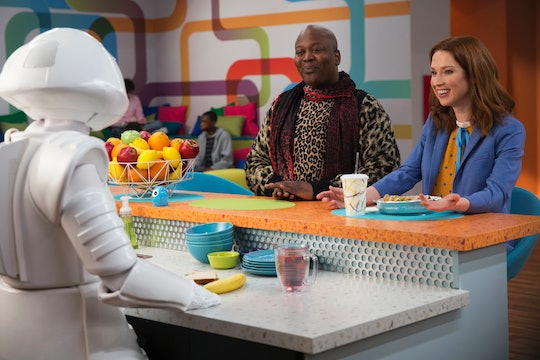 It’s time to break open a bottle of Pinot Noir, because six new episodes of Unbreakable Kimmy Schmidt just dropped on Netflix. The episodes come as Part 2 of Season 4, and pick up with Kimmy promoting her children’s book, The Legends of Greemulax. If you’re a fan of the series, and can’t get enough of Kimmy and Titus’ hilarious hijinks, you’re probably wondering how many episodes of Unbreakable Kimmy Schmidt are left.

More Like This
Here Are The Best Kids' Shows On Hulu To Enjoy As A Family
Everything There Is To Know About The Friends Reunion
The Great-Granddaughter Of Alice In Wonderland Is Getting Her Own Show
Peppa Pig Is Going Camping In A New Live Show & You’re Invited!

In an interview with The Hollywood Reporter, showrunner Robert Carlock said that going into the show, producers had planned a five-season series. He explained that getting the opportunity to split Season 4 into two big parts, with the extra time they had for Part 2, made showrunners feel like they were able to end the series in the way they planned. "We were never quite sure what the life of the show wanted to be," said Carlock. "When we split up this fourth season into kind of a fourth and a fifth — just in the boring, most practical way, you could think of them as two short seasons — one wouldn't be coming out until 2019, so it just felt like the right time to pull up stakes since we were kind of pushing ourselves into next year.”

Carlock, who created the series with TIna Fey, also confirmed that plans for an Unbreakable Kimmy Schmidt movie are in the works, and with a movie ending, showrunners could give more closure Kimmy’s adventures, as well as those of her friends. "We now have a shorter runway than we originally thought we would and don't want to overstuff it and rush it," he told THR. "And there are things that I think would be fun to hold off for kind of a big epic finale in feature form."

In a more recent interview with AV Club from earlier this week, Carlock and Fey said that even though these last six episodes will bring Kimmy’s story to a happy end, an Unbreakable Kimmy Schmidt movie is still a real possibility. “We knew we wanted to these final episodes to feel like an ending,” said Carlock. “That doesn’t mean that we don’t have more stories we could possibly tell with these people. Netflix told us to say we’ll keep you posted. That’s the sanctioned answer.”

Whether it’s a movie or a spin-off, fans can take comfort in knowing that there’s real hope for Unbreakable Kimmy Schmidt to come back in some form or another. Until then, they can enjoy the last six episodes which are currently streaming on Netflix.