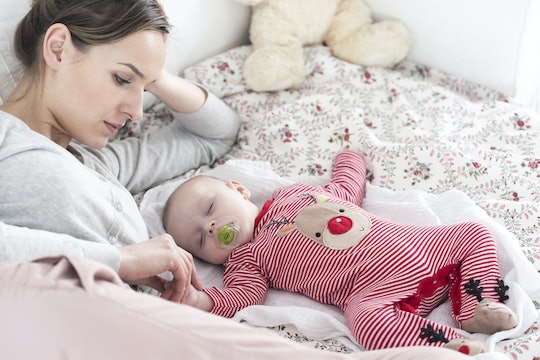 Here's How Many Hours A Day Baby Should Nap

My daughter is 14 months old, which means she's constantly on the go. From the moment she wakes up until it's time for bed, we're running around the house, playing, laughing, and just generally having a blast. It's so much fun, but it's also incredibly exhausting. I have to admit that I sometimes sneak a peak at the clock to see if it's nap time yet, because I'm so worn out. It's hilarious to me to compare that to my mindset a year ago, when I was constantly wondering, "How many hours a day should my baby be napping?" Back in those days, she slept so much that I was actually a little worried about her and wandered if something was up.

For the first few months of her life, it seemed like my baby did very little but sleep. What I didn't realize though was that that's pretty much par for the course. According to the Mayo Clinic, newborns will sleep and wake up throughout the day and night. It's not until they're about 4 months old that they begin to stay awake for more of the day, with some naps mixed in. How long those naps will last and how much sleep they'll get in the course of a full day will vary widely from baby to baby, however. What To Expect noted that after 4 months of age, babies will typically sleep between 10 and 12 hours a night with three to five hours of naps during the day. As they get older, that amount will gradually decrease. As your baby approaches the one year mark, they may sleep closer to 11 hours at night with three to four hours of naps. My daughter has never fit that mold, however. She'll sleep for 12 hours overnight without a problem, but she generally only takes two 30 minute cat naps per day. When I hear moms talk about how productive they were while their baby took a two hour nap, I can in no way relate.

As for how many naps your baby will take, that too will change over time. According to Baby Center, at six months your baby may have gotten onto a schedule where they nap two or three times a day. Around a year old, that may stay closer to two. And by 18 months, your baby may be down to just one nap a day.

Whether you get a champion napper or a cat napper like me, you can encourage good day time sleep with a few simple tricks. According to Today's Parent, it may help to put your little one down for naps at consistent times, to make sure they're not hungry or wet, or even to play music or white noise in their room.