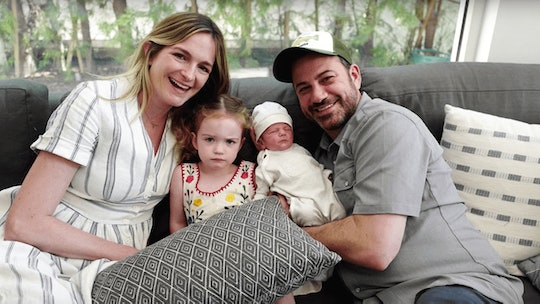 Thousands Of Kids Are Born With Pre-Existing Conditions

On Monday night, late night host Jimmy Kimmel announced the birth of his second child, a son. The news was bittersweet though, Kimmel became emotional describing a congenital heart condition that nearly claimed his newborn son's life. Before ending his moving monologue, Kimmel took on the national health care debate, noting that before 2014, his son's heart condition would have been considered a pre-existing condition, preventing him from ever getting health insurance. Kimmel's monologue raised several good points — and questions — such as how many kids are born with pre-existing conditions? The answer is important, given that pre-existing conditions have long been at the crux of the country's health care debate.

The Families USA data didn’t drill down further on childhood age groups, or pre-existing conditions at birth. For that, we have to again turn to the CDC. At its facts about birth defects page, the CDC estimates that 120,000 babies are affected by birth defects each year. Birth defects can include everything from CHD, to hearing loss, and cleft lip, to conditions such as Down Syndrome.

This is what makes Kimmel’s emotional plea about keeping health care accessible and affordable so important: It’s not just about one famous parent’s moving story. The American Health Care Act would be devastating for hundreds of thousands of parents whose babies are born with pre-existing conditions. A particularly alarming recent finding by the CDC noted that deaths related to birth defects were more common for babies whose births were covered by Medicare than births covered by private insurance. Given that the AHCA plans to gut Medicare, the implication for some of America’s youngest, poorest, and most vulnerable patients is literally a matter of life or death.

As Kimmel put it so succinctly on Monday, “If your baby is going to die and it doesn’t have to, it shouldn’t matter how much money you make.”