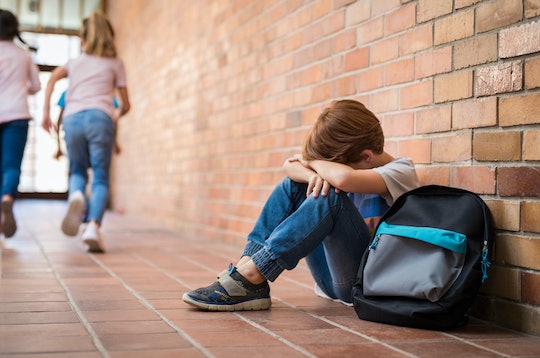 The Number Of Kids Bullied Each Year Is Truly Heartbreaking

When we think about parents "in the trenches," more often than not we think of a mom up all night with a newborn or a dad at his wit's end with a tantrum-throwing toddler. But parents of older children have their own trenches to navigate, and the problems are often more complicated. No parent wants to imagine their child being hurt, physically or mentally, but there's no denying that bullying has become a scary, widespread issue. How many kids are bullied a year? And how likely is it that your own child will become a victim of bullying? Sadly, the statistics are heartbreaking.

In the past few decades, more attention has been paid to the topic of bullying than ever before. The definition of bullying, according to the National Bullying Prevention Center, is "an intentional behavior that hurts, harms, or humiliates a student, either physically or emotionally, and can happen while at school, in the community, or online. Those bullying often have more social or physical 'power,' while those targeted have difficulty stopping the behavior." In terms of a legal definition, StopBullying.gov has created a handy database to learn about what laws and policies your state has in place regarding the topic of bullying.

According to the National Bullying Prevention Center and research done by the National Center for Educational Statistics, 20 percent of students report being bullied. To give you a clear image of what that looks like, that means a little more than one out of every five children has been or is being bullied. According to the website, "33 percent of students who reported being bullied at school indicated that they were bullied at least once or twice a month during the school year," and "13 percent were made fun of, called names, or insulted; 12 percwent were the subject of rumors; 5 percent were pushed, shoved, tripped, or spit on; and 5 percent were excluded from activities on purpose."

As the statistics above show, bullying comes in different forms. Your child may not get shoved into lockers or intimidated for their lunch money, but that doesn't mean they aren't being bullied. According to StopBullying.org, there are three main types of bullying: verbal, social, and physical. Verbal bullying refers to "saying or writing mean things," and includes things like name-calling and threats. Social bullying "involves hurting someone’s reputation or relationships," and refers to behavior like purposely leaving someone out or spreading rumors. Physical bullying refers to "hurting a person’s body or possessions," like hitting, pinching, and pushing. Verbal and social bullying can occur over electronic devices, which is referred to as "cyberbullying."

Sadly, according to the stats from the National Center for Educational Statistics, less than half of all kids who experience bullying end up telling an adult at school about it. Because it's such a common issue, parents and teachers should be on the lookout for the warning signs. According to StopBullying.gov, your child might be getting bullied if they start coming home with "unexplainable injuries" or "lost or destroyed clothing, books, electronics, or jewelry." Additionally, they might complain about headaches and stomachaches (real or fake), have trouble sleeping, lose focus in school, and change their eating habits.

On the flip side, it's crucial to be aware if your child is the one doing the bullying. It can be hard to imagine your own child as the aggressor, and even harder to discover it's true, but it's incredibly important to address the problem. StopBullying.gov says that if your child is coming home with new belongings, acting increasingly aggressive, hanging out with bullies, and frequently getting in trouble at school, they might be bullying others.

Over one-fifth of school children experience bullying, which is 100 percent too many. Help prevent bullying by talking about it with your kids and helping them understand it's unacceptable. Teach them how to get help, keep all lines of communication open, and encourage them to come to you if anyone treats them poorly. Most importantly, teach your children the importance of kindness and mutual respect. Teach them how to give it, and how to accept nothing less in return.