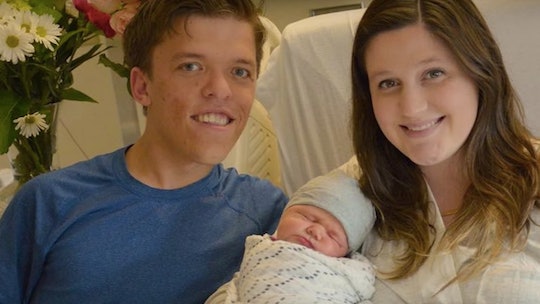 How Many Kids Are Diagnosed With Achondroplasia?

As Zach and Tori Roloff bask in the delight of finally meeting their newborn, the first-time parents revealed to PEOPLE on Tuesday that their son, Jackson Kyle, was born with the same kind of dwarfism — achondroplasia — as his father. As a genetic condition, there was always the chance that the Roloff's baby might have achondroplasia, but what many people don't realize is that the condition can appear in children to average-sized parents, too. How many kids are diagnosed with achondroplasia? It's considered a rare genetic disorder, according to the Genetic and Rare Diseases Information Center at the National Institutes of Health.

Achondroplasia is a mutation of the FGFR3 gene, and is the most common form of dwarfism. It accounts for approximately 80 percent of all dwarfism cases. For the general population, achondroplasia affects approximately 250,000 worldwide, according to a 2007 study published in Lancet. The NIH noted that achondroplasia occurs in 1 out of every 15,000 to 1 out of 40,000 newborn births globally. The Little People of America organization has published slightly higher rates, compiled by research from Johns Hopkins Medical Center: The LPA estimates achondroplasia occurs in as many as 1 in 26,000 to 1 in 40,000 births.

For Zach and Tori Roloff, they had a 50-50 chance that their son might be born a little person. Even Zach's parents, Matt Roloff and Amy Knight, had the same 50-50 chance of developing achondroplasia for each of their four children; Zach's three other siblings did not have the genetic mutation and are each of average stature.

The couple have spoken candidly during Tori's pregnancy about their hopes, fears, and concerns about the possibility of their son having achondroplasia. Earlier this season on Little People, Big World, Tori expressed her concerns for her son's possible dwarfism, especially after a less than reassuring ultrasound. Tori spoke about her fears: "It’s a big deal. It is scary. No parent wants to hear that their child is different, no matter what." Zach tried to counter her fears by telling his wife, "But to me, that’s not different. He’s just like me!"

Zach has always taken a positive approach about the situation, despite his own fears that his son might have achondroplasia. In a recent interview with PEOPLE, he explains how his own experience growing up as a little person more than prepares him for parenting through the unique social and physical challenges the disorder brings. "You have to encourage a dwarf child a little more because it will take them five steps to do what others can do in two," Roloff said. "But I knew, dwarf or not, I was going to parent my child with the mentality that not everyone gets a trophy. You have to earn it."

The new episode of Little People, Big World — "He'll Be Whoever He's Meant to Be" — will air Tuesday, June 6 at 9 p.m. Eastern on TLC.