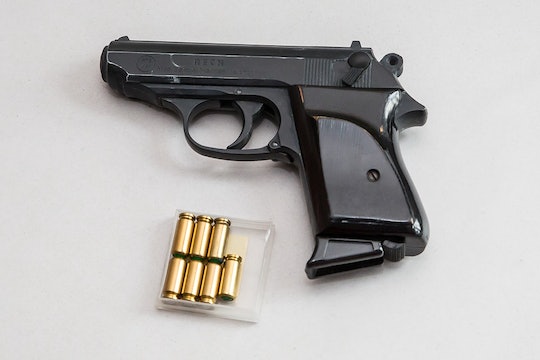 Number Of Kids Killed In Gun Accidents Each Year Could Rise

While gun violence is a complex and concerning issue in the United States, a lack of safety regulations has led to countless gun accidents involving children and it raises a lot of important questions. Like, how prevalent are these tragedies throughout the nation? And how many kids die in gun accidents each year? Fortunately, a 7-year-old Louisiana boy caught in latest incident survived and is reportedly in stable condition after another student brought a gun to school, which subsequently led to the accidental shooting. Sadly, though, not every child is this lucky and these accidents happen far too often.

According to Time, the most recent incident happened after a gun fell out of a child’s backpack. Another student picked up the firearm and accidentally fired it, shooting the 7-year-old boy. The young boy reportedly underwent surgery following the incident, but survived. Unfortunately, accidents like this one that happened in a Louisiana classroom are too common.

Curious children finding and handling unsecured and loaded guns leads to an alarmingly high rate of fatalities every year; An investigation led by the Associated Press and USA Today found that, within the first six months of the year in 2014, gun accidents killed at least one child in the United States every other day.

According to CBS News, that statistic is far higher than limited federal statistics indicate, adding that the vast majority of shooters and victims are boys. To put that into perspective, the Centers for Disease Control and Prevention (CDC) reported that 74 minors died from gun accidents in 2014, but the AP and USA Today analysis counted 113 fatalities for that same year.

Furthermore, a 2012 study by the Agency for Healthcare Research and Quality Healthcare Cost and Utilization Project Kids' Inpatient Database found that the rate of injuries is also high, with about 16 children a day being hospitalized for gun shot wounds that each year. Data collected by the Gun Violence Archive, a nonpartisan research group, shows that some 230 children between the ages of zero and 11 years old have been killed or injured by guns already this year.

The Brady Campaign, a nonprofit organization for gun control, estimates this number could substantially rise by the of 2017, reporting that 17,500 youths under the age of 17 are injured or killed each year due to gun violence. Other statistics the organization found:

These numbers are devastatingly high, but with thorough prevention methods in place, the rate at which these tragedies occur could hopefully drop.