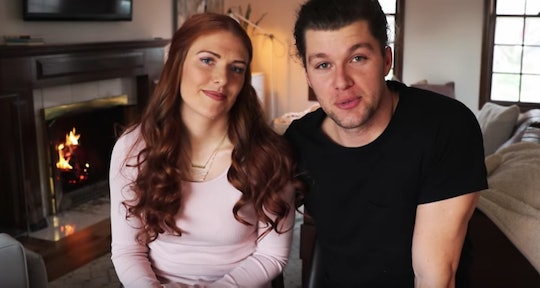 Audrey & Jeremy Roloff Often Talk About New Parenthood, But How Many Kids Do They Have?

It seems like just yesterday that the Roloffs gave birth to little Ember Jean. But now that the new season of Little People, Big World is airing, it's worth wondering just how many kids Audrey and Jeremy Roloff have and whether they are planning on having any more, right? That would be some very good news.

Right now, though, there aren't any new kids on the way. The couple gave birth to their first kid, Ember Jean, in September 2017 and they seem more than happy with their family of three right now. Last June, Audrey captioned a bump photo, "Baby girl is healthy and non-stop moving this bumpin belly. I still can't get over how miraculous pregnancy is. I'm so humbled and honored that the Lord would entrust me with this baby to grow, nurturer, instruct, and love. Jeremy and I are getting more and more excited to meet her, but also feeling less and less prepared."

Jeremy and Audrey's child is not a little person, as was revealed on the show. The gene is recessive and Audrey's family would have to have it, which they don't, as the couple explained to Us Weekly.

She added that just 10 weeks before she was due, the couple had nothing ready in the house for an infant, which some fans might notice from the show. "We are 10 weeks from my due date (August 31st) and we still don't have anything for baby yet... not to mention our house is currently a construction zone... so we are living with my parents (pictured - also currently a minor construction zone). No shortage of excitement and chaos over here," she wrote at the time.

That construction was a big deal for the couple, according to the Daily Mail, and they were determined to have it completely finished before the baby came. It was also super close to Jeremy's brother Zach and his wife Tori, who have a farm just a half an hour away in Oregon.

Although things were busy during Audrey's first pregnancy and the first few months of baby Ember's life, Jeremy told Us Weekly that he likes "the idea of a big family." In the same interview, Audrey added that she's always hoped "to have four children," so more could be on the way. Just not at this very moment, which makes sense given how much they have going on.

Audrey also told Us Weekly that she struggled in the very beginning to connect with her daughter. She told the magazine that it was "emotionally and physically exhausting" and there were "a lot of struggles right out of the gate." Of course, the new mom added that it was all "worth it" in the same interview about parenting, but it sounds like the couple will definitely take some time before delving into that big, four kid-style family.

But those struggles have taught Audrey a lot, as she shares on social media. She recently posted a selfie with a caption explaining that motherhood has taught her "grace." She wrote:

If I had to sum up what motherhood has taught me into one word, it would be grace. I can be pretty hard on myself, and motherhood is teaching me to give myself grace in the moments when I feel unequipped, ill prepared, or like I don’t measure up...When my ideals don’t fit to reality, grace. When I’m overwhelmed by all the conflicting research on all the hot button issues, grace. When I start to compare myself to the other mama warriors out there, grace.

It sounds like Audrey and Jeremy are just getting the hang of the whole parenthood thing and taking things one step at a time. There might not be any pregnancy announcements coming anytime soon, but anything's possible. Either way, the couple seems happy as can be right now.