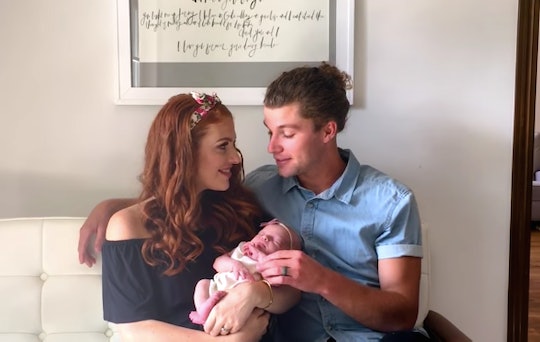 'Little People, Big World's Audrey & Jeremy Roloff *May* Want To Have A Big Family — Here's Why

With Little People, Big World returning to TV, fans of the show have much to look forward to from the show's central figures. Since the last season, Audrey and Jeremy Roloff have welcomed a baby girl and she will likely be a focal point of the show's return. With all of the excitement surrounding baby Ember, you may be wondering how many kids Audrey and Jeremy Roloff want to have eventually. There's no big baby news to break as of now, but that doesn't mean that more little ones may be in the couple's future.

Audrey and Jeremy welcomed their first child together, Ember Jean, in September 2017, according to In Touch Weekly. Audrey shared her pregnancy with her followers on Instagram, showing her growing belly and reflecting on the process. In June, she shared a bump photo with a caption that showed how in love she already was with baby Ember.

"Baby girl is healthy and non-stop moving this bumpin belly. I still can't get over how miraculous pregnancy is," she captioned the photo from June 2017. "I'm so humbled and honored that the Lord would entrust me with this baby to grow, nurturer, instruct, and love. Jeremy and I are getting more and more excited to meet her, but also feeling less and less prepared."

After Ember arrived, Jeremy and Audrey spoke with Us Weekly about their journey into parenthood during an adorable family photoshoot. In that interview, the couple hinted that they may not be quite finished growing their little family. Jeremy stated that he likes "the idea of a big family," and Audrey added that she has hoped "to have four children." So, there may be more baby Roloffs to come!

As much as she has enjoyed pregnancy and motherhood, Audrey has been honest about the difficulties that she has faced. She told Us Weekly, that breastfeeding has been “emotionally and physically exhausting” and that she’s “had a lot of struggles right out of the gate,” but holding her sweet baby “makes it all worth it.” Along with sharing her struggles in the interview, she also opened up on Instagram. In one post, she explained that she has gone through a lot of pain since delivering her daughter:

She went on to say that these experiences made her feel "frustrated, discouraged, and heart ached," as well as like she was failing her baby. But she is dedicated to continue providing her daughter with the best care she can. Along with dedication to their child, Audrey and Jeremy are dedicated to one another. They told Us Weekly that they make time for dates and some time one-on-one.

“We truly believe that with a happy marriage comes a happy family also," Jeremy told the publication. Audrey echoed these sentiments shortly before having Ember in a blog post, saying:

People are constantly asking me, "Are you so ready to get that baby out of you?!" And as excited as I am to meet her, I’m also trying to cherish our final days "just us" before baby girl rocks our world. In the waiting, I’ve been focusing on thankfulness, and gratitude has made me even more in awe of the beauty of pregnancy.

Less than a year after welcoming their first child together, it is likely that Audrey and Jeremy are still getting their bearings as parents and adjusting to their new life together. Fans may have hope for more babies in the future, but it will be — and should be — on the couple's time. Until then, I'm sure there will be plenty of adorable footage of little Ember to feed your baby fever.