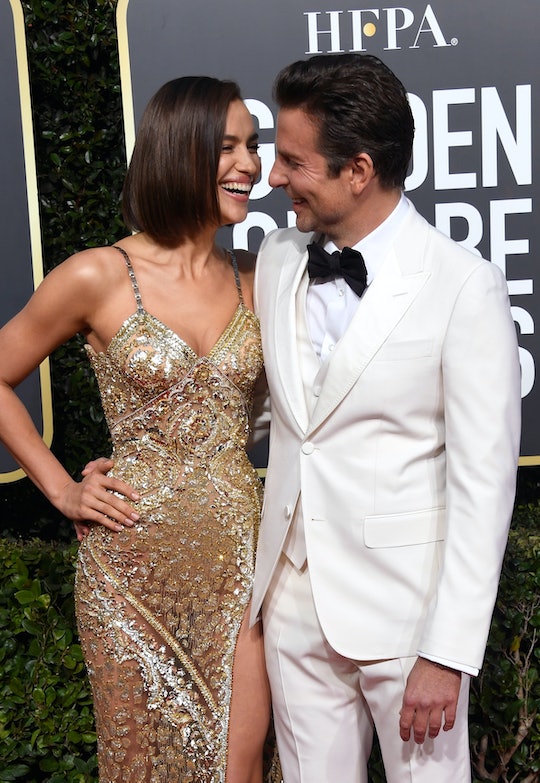 Following several months of rumors and speculation, reports have surfaced that Bradley Cooper and Irina Shayk have apparently decided to call it quits. The notoriously private couple had been together for more than four years and, of course, had built a life together over that time, including becoming parents. But how many kids do Cooper and Shayk have together?

Cooper and Shayk have one child together, a daughter named Lea De Seine. According to Us Weekly, Shayk gave birth to their first child in March 2017. At the time, the supermodel and Cooper had been dating for about two years, according to Entertainment Tonight. The couple, however, never formally confirmed Shayk's pregnancy, nor the arrival of their baby girl to the public or fans.

On Thursday night, People reported, citing an "insider," that Cooper and Shayk have decided to part ways and are "amicably working out how to share custody of their daughter." Romper's request for comment from Cooper's representative was not immediately returned.

Though Cooper nor Shayk have yet to comment on the breakup rumors, it's clear that, no matter what happens with their relationship, their daughter is their top priority — and always has been.

Back in September 2018, in fact, Cooper opened up about fatherhood, telling NPR's Morning Edition that being a dad changed the trajectory of his career. The A Star is Born actor said at the time that having a child "is a miracle," adding that is changed him in a major way.

"So I guess having a child, and having a family of my own — which is a miracle and something I've always dreamt of — has opened me up even more, I guess, to the day, and to be present," he shared with Morning Edition, joking, "Well, I've been opened up to a world of children's music, that's for sure..."

Shayk, a successful Russian model, has also talked openly about motherhood after her daughter's arrival. Earlier this year, she told Glamour UK that her heritage values family over everything, and that has informed how she approaches motherhood and family life. "I'm from Russia and in Russia, family is one of the most important things," she told the magazine in February.

Before that, she talked about balance work and motherhood, telling E! News more women need to be encouraged to do both, rather than choose one. Shayk, whose career has skyrocketed since the birth of her daughter, shared with the outlet a belief that women are "the strongest," and can achieve whatever they set out to do. She's not wrong, and has embodied that message since becoming a mom herself.

"I think now a woman has the freedom to work and to be a mom and to be herself. I think it's really important to remember that a woman is the strongest one and that if we want we can manage everything at the same time," she told E! News at the time.

Whatever the reason behind Cooper and Shayk's reported split, it's clear that co-parenting will always be their top priority. Both have masterfully stepped into their role as parents, and made sure that no matter what's going on in their careers, family is top priority.