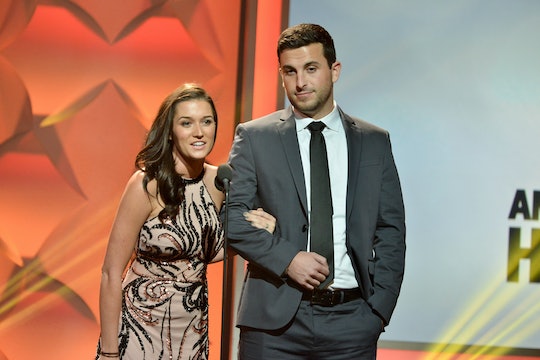 As pretty much any adult knows, one of the first questions people will ask you when you start having kids, or even just when you get engaged, is "how many kids do you want?" It's not a bad thing, necessarily, especially if the couple in question is open to answering it. So is the case with one very happy Bachelor in Paradise couple. So, just how many kids do Jade Roper and Tanner Tolbert want? After welcoming their first daughter, the couple is just happy to be a family of three, but that doesn't mean they won't eventually want to expand their family.

She's here, our little sweetheart! Tanner and I are very proud to announce the arrival of our baby girl this Thursday morning. There's truly no words to describe the feeling holding you in our arms for the first time and looking into your eyes. We love you, precious girl.

Later, the couple revealed that they had named their daughter Emerson Avery Tolbert, celebrating the happy occasion with numerous photos of the new family of three, even giving baby Emerson her own Instagram account.

Roper and Tolbert have been together since 2015, and were actually married on television last year. But that doesn't mean that they're sharing everything about their life together with the public. However, in the past, the two have expressed interest in having more than one kid. In January, right around the couple's 1-year wedding anniversary, Roper told E! News that she was ready to start a family.

"We're building a big house so we have lots of spare rooms that need children," she told E! News. Roper also revealed that Tolbert feels the same way. "That's something that was really important to me," she explained, "was to find somebody who was ready to have a family, and Tanner is at the same stage too so that was definitely very attractive about him."

The two 30-year-olds have previously told People that they were open to having more than one child, well, Tolbert is anyways. “I’m hoping for a boy,” he said. “Not that I don’t want a girl, I actually want one of each. It’s just, I’m going to make her keep trying until we have a boy, so I’d like to get it out of the way sooner.”

Roper, on the other hand was a little more skeptical. “He thinks I’m going to have four children if the first three are girls, but I think he’s wrong on that,” she told the magazine.

And whatever the case may be, it's clear that the family is incredibly in love with little Emerson and it may not be a far-fetched idea that this BiP pair welcomes a few more bundles of joy down the road.