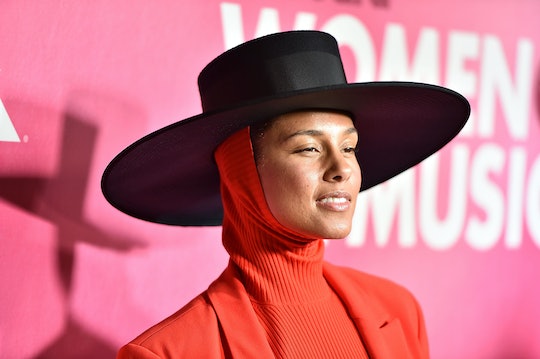 How Many Kids Does Alicia Keys Have? There Are A Lot Of Boys In Her Family

This year is shaping up to be a big one for the music industry — especially for those who've been a mainstay in the business for years. Most recently, the Recording Academy announced that Alicia Keys, the "Fallin'," singer is slated to host the 2019 Grammy Awards. After six successful studio albums, this is a major gig for her. But what about Keys' personal life? She's not only a talented R&B singer but also a mom. So, how many kid does Alicia Keys have? The answer may surprise you.

Keys is married to fellow musician Kasseem Dean aka Swizz Beatz, according to The Sun. Together they have two biological children. Their first son, Eygpt, was born in 2010 followed by his brother Genesis in 2014, according to PopSugar. Keys is also step mama to Dean's three other children from previous relationships — Prince, Kasseem Jr., and Nicole.

In an interview with ABC News's Michael Strahan, Keys opened up about what it's like to co-parent her step children with Dean's ex-wife Mashonda Tifrere.

"We love each other. I mean, we hang out with each other. We go to dinner together," Keys told Strahan. "It is a beautiful partnership. And that is really, really special. I'm very, very proud of that."

In fact, Keys penned the forward to Dean's ex-wife's book, Blended, which talks about the success of their two blended families and how others can do it too, according to ABC News. And, Dean wrote one of its chapters.

So, are two biological kids enough for Keys? The answer is still up for debate. Keys said that a baby girl would be a blessing, but that they aren't ready for another quite yet, according to E! Online.

Either way, it looks like Keys will have to get a sitter for Grammy night, Feb. 10. And she's no stranger to the Grammy Awards, having won 15 of her own over the past years, according to CNN.

"I know what it feels like to be on that stage, and I'm going to bring that vibe and energy," Keys said in a statement, according to CNN. "I'm so excited to be the master of ceremonies on the biggest night in music and celebrate the creativity, power and, magic. I'm especially excited for all the incredible women nominated this year!"

And while this gig is a huge honor for Keys, her two boys seem totally uninterested, according to USA Today. You can hear one of them asking, "What's the Grammys" in a video that she posted to Instagram. Kids will be kids, no matter if their mom is a super star or not. One day they'll learn, though, that mama is a Grammys pro.

So to recap, Keys has two biological children and three step children for a total of five children. That's a pretty impressive brood. And judging from her social media posts, everyone seems pretty happy. As to whether Keys and hubby Swizz Beatz are looking to add child number six, it's still unclear. Until then, they both have their hands full — in the best possible way.