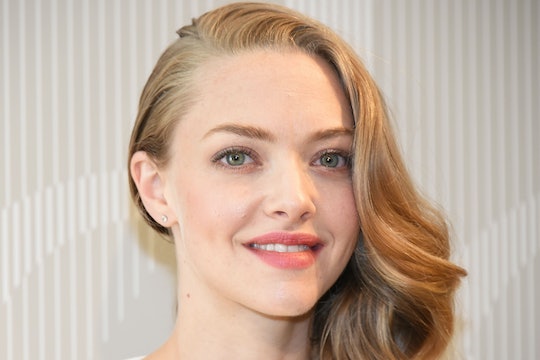 Amanda Seyfried Isn't In A Rush To Expand Her Family

If you're looking for something to do as a family this weekend, you might want to check out The Art of Racing in the Rain, a film based on Garth Stein's novel of the same name. And as you might have already heard, the dog-centric movie stars Milo Ventimiglia and Amanda Seyfried, who portray a married couple in the film. Their characters are parents to one child in the movie, a plot point that has led some to wonder: How many kids does Amanda Seyfried have in real life?

I don't know about you, but my first memories of Seyfried's acting career dates back to her role as Karen Smith in the 2004 hit, Mean Girls. But somehow, 15 years have passed since then and a lot has changed in Seyfried's personal life. Seyfried, for instance, is now a married mother.

To catch you up to speed, the Mama Mia actress gave birth to a baby girl in March 2017, right around the same time she married Thomas Sadoski. In fact, Seyfried was nine months pregnant at the time, according to E! News. Although Seyfried and Sadoski have opted to keep their daughter's name a secret, the talented mama has opened up about her parenting experience. “I just happened to get pregnant,” Seyfried told People about the timing of her becoming a mother. “If it happens to you, you just make it work.”

As for whether more kids are in Seyfried's future? The actress revealed she and Sadoski would love to eventually expand their family, it's just they just haven't nailed down the specifics when it comes to timing. “I want to get pregnant again, but I’m not ready just yet to have a second," she told People. “I would like my daughter to be in school and then have my own time with a new baby. But it’s so hard to plan.”

Seyfried and Sadoski are also taking their acting careers into consideration, with the Mean Girls alum explaining to People: “You just have to go one foot in front of the other and talk as a family if it works for you guys because [our daughter] is still young. She’s not in school yet. We are more flexible, but it’s going to be different as she gets older and the more kids we have."

In regards to how many children Seyfried ultimately wants to have? It looks like the number two has come up more than once. In fact, a June 2015 interview echoed this exact sentiment. "I'd like to have one in the next four or five years," Seyfried told E! News. "And the second one can happen between 35 and 40. Or I can adopt... It's fine. I definitely want to a couple kids."

So, there you have it! For now, Amanda Seyfried and Thomas Sadoski have one child together, but it's clear they want at least one more little one (btw, I said "just one more" when I had two, and now I have four kiddos). I suppose fans will just have to wait and see how many children the two end up with because you just never know what life will throw your way.

More Like This
41 Strong & Sweet Baby Boy Names That Start With “K”
When It’s Safe To Bring Your Newborn To A Restaurant, According To A Pediatrician
Can You Burp A Baby Too Hard? A Pediatrician Shares Tips For Gassy Tummies
The Best Toys For 3-Month-Olds