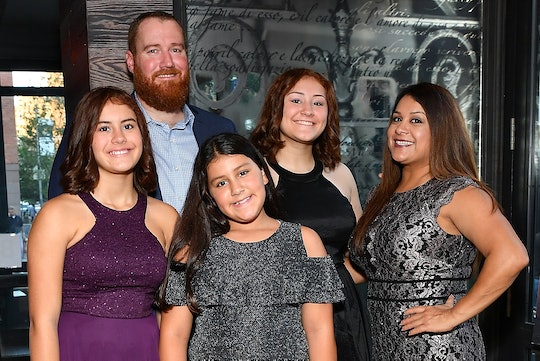 In 'The Sentence,' Cindy Shank Got 15 Years In Prison, But Her Kids Were Also Punished

When considering a prison sentence — whether just or unjust — we tend to focus on the impact it has on the person who was actually convicted, but that person's loved ones, though they've committed no crime, end up being punished, as well. That's the lesson viewers will learn from The Sentence, an HBO documentary about Cindy Shank's daughters, who grew up without a mother while she was serving time in a federal prison over 1,000 miles away for the majority of their childhoods.

Shank's story started in 2002, when her live-in boyfriend was shot and killed outside their apartment, according to TIME. Cocaine and illegal arms were found in their home, according to The Daily Beast, but Shank wasn't involved in the boyfriend's crimes, so no charges were filed at the time. Six years later, she'd moved on, but the case caught up with her, and she was arrested and charged with conspiracy, according to TIME.

Her home was seized, and she was convicted and sentenced to the mandatory minimum of 15 years in prison, according to NBC News, leaving behind her husband and three daughters, Autumn, Ava and Annalis, who were then just 4, 2, and 6 weeks old, according to NPR. That's when her brother, Rudy Valdez, began documenting the girls' lives for his sister while she was separated from them.

The documentary opens with scenes of Shank's oldest daughter, Autumn, getting ready for her dance recital the day after her mother went away. Shank can be heard speaking to her daughter during her 15 weekly minutes of phone time. "I wasn't a documentary filmmaker when I started this. I learned to become a documentary filmmaker to make this film," Valdez told Vice, adding:

In the film, Cindy says that line to Autumn, "Do you know what Mommy's going to do when you go dance? I'm going to lay down in my bed, I'm going to close my eyes, and I'm going to think about you.” And when I heard that line, something in me just sort of clicked, and I became a filmmaker at that moment. I realized that I had an opportunity to tell a story that you don't get to hear about. When you hear about mass incarceration and you hear about this war on drugs and you read all of these stats, you never get to hear about the children and family left behind and the ripple effect that these sentences have on the community.

Although the footage eventually became a Sundance award-winning documentary, according to Variety, it still served its original purpose of preserving those years of the girls' lives for Shank. "Rudy showed me a seven-second clip of the girls and I just lost it," Shank told The Daily Beast. "These are images of my girls that I'd never seen. I'm looking at everything, I'm looking at their expressions, what they were wearing. Looking in their rooms for the first time." Valdez started filming in March 2008, as noted by The Hollywood Reporter. In addition to making the film and helping to raise his nieces, he worked to get his sister released from prison, and in late 2016, she was finally granted clemency by President Barack Obama.

In an interview with The Marshall Project, Valdez explained that both filmmaking and criminal justice reform advocacy were roles that were just suddenly thrust upon him by his family's circumstances. "I was a teacher. I taught pre-K and Kindergarten," he said. "I literally bought Filmmaking for Dummies!"

He's already shown his film to lawmakers in Washington, according to The Marshall Project, but he also wants to screen it in law schools, for "the people who are going to be enforcing these laws and these sentences in the future and allow them to see the compassion that needs to go into what they're doing," he said. Not just for the people they convict, but for everyone that conviction affects. As he told The Marshall Project, "When my sister was moved to Florida and her kids were in Michigan, they got to see her once a year. That's cruel and unusual punishment."

The Sentence is currently airing daily on HBO, and is also available on demand.