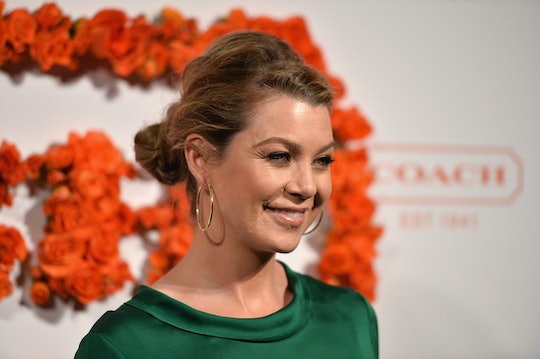 We might know everything about Meredith’s dark and twisty life on Grey's Anatomy. But, like any good fan of the long-running medical drama, some might be wondering about the series’ star, Ellen Pompeo, and what her life is like off-screen. From just a quick glance at the 47-year-old actress’ Instagram account, you can easily see her enjoying donuts with a pal; walking her toy poodles through an orchard; and even dropping exciting family news like she did on her page just a few months ago, after she and husband, Chris Ivery, welcomed the latest addition to their family, a baby boy named Eli Christopher. So, just how many kids does Ellen Pompeo have?

The Grey's Anatomy star and Ivery, a music producer, are parents to three adorable children: 5-month old Eli as well as 7-year-old Stella Luna and 2-year-old Sienna May. According to Us Weekly, the mom of three gave birth to their oldest child in September 2009 and Sienna was born via surrogate in August 2014. Pompeo announced the exciting news two months later during an appearance on Jimmy Kimmel Live, revealing that it was a top-secret operation. She said at the time:

This is an incredible thing to do with your life, to give the gift of carrying someone's child. I am forever grateful and feel very blessed and grateful to her — she who will remain anonymous. I was there with her when they inseminated her, and we held hands. I looked into the microscope and I saw the embryo. I saw the baby, and they put it in a thingy, and they inseminated her. And then we held hands, and we prayed, we talked to God, and if she was meant to be. He said he was going to try to help us out, and now we have a gorgeous baby girl.

The Old School actress hasn't addressed whether their third child also arrived via surrogate or if they welcomed him through a different alternative method, such as adoption or IVF. But, she has not been shy to show off her new little guy on social media ever since his arrival.

"Chris Ivery just fell a notch.. I've got a new guy," Pompeo captioned the first pic of her newborn last December, which shows her husband cuddling their smiling baby.

Pompeo also got in on the snuggle action when she posted this adorable video of her dancing with Eli on New Year's Day. "Boy Crazy....Here's to a year filled with happiness and love!" she wrote on Instagram.

While Pompeo only occasionally shares photos of her family on social media, she doesn't necessarily hold back when she gushes about her children during interviews. Regardless, it's clear that motherhood suits her very well.