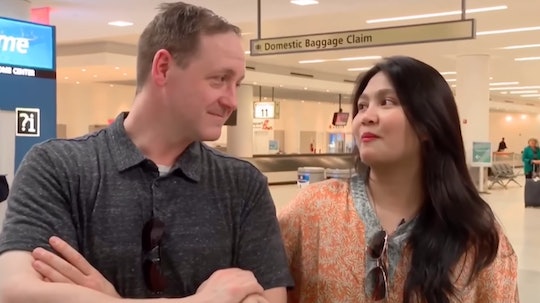 On this season of 90 Day Fiancé, Eric and Leida didn't only need to make their two lifestyles mesh, but also the lifestyles of their children. Both of them were single parents before they met, and now, their kids are all part of one big family. So exactly how many kids does Eric from 90 Day Fiancé have?

Eric has three daughters, whom he co-parents with his ex-wife. They are: Taneil, who is 21; Natasha (aka Tasha) who is 19; and Jeneka who's just 11. He describes his daughters on the show as "wonderful," and of the three, the only one he lives with is Tasha. Eric notes on the show that Leida, 29, is actually closer to his oldest daughter in age than she is to Eric, 40.

Leida has one son, a 5-year-old boy named Alessandro, whom she shares with her ex-husband. One of Eric and Leida's most famous arguments came in the the first episode this season, when Leida first arrived at Eric's apartment — and Tasha had a big role in it.

"What the f*ck is this?" Leida tells Eric upon entering his apartment for the first time and seeing the mess of stuff all over the small apartment. "Why don't you just get maid?" she asks him. "We're not getting a maid," Eric responds. He blames the mess on Tasha, and explains that he told his daughter to clean the apartment while he was away, but instead, it seems like she purposely made the place even dirtier.

Editor's Note: The video has since been deleted.

Eric hasn't posted any photos with his daughters on Instagram, but Leida has posted a few of the couple along with her son and his youngest daughter, Jeneka, all on vacation together. "La Familia," she even captioned a shot of the four of them in Washington, D.C.

As explained on 90 Day Fiancé, Leida's family back home in Indonesia is well-off — her parents have personal drivers, maids, chefs, the works. And Eric says he is "concerned the life I have here isn't enough for her." Unsurprisingly, finances have remained a point of contention for the couple all season so far.

When Leida's parents visit them in Wisconsin, Leida puts a lot of pressure on Eric to impress them — it's implied that she means with his personality, since he won't be able to with his checkbook. And in another recent episode, Leida and her sister Reina discussed the issue of Eric paying his ex-wife child support. "Child support is not something cheap, you know? It's still a big amount of money," Reina told Leida. "I don't get money from my previous husband for the child support," Leida said on the show. "So it doesn't make any sense to me for Eric to be sending money every month, so this thing needs to stop."

Leida has made it very clear on her Instagram that she loves living in Wisconsin with Eric, so it's likely that the two are now married, and living together with Alessandro and Tasha. I guess Eric was able to sort out his finances for his bae!