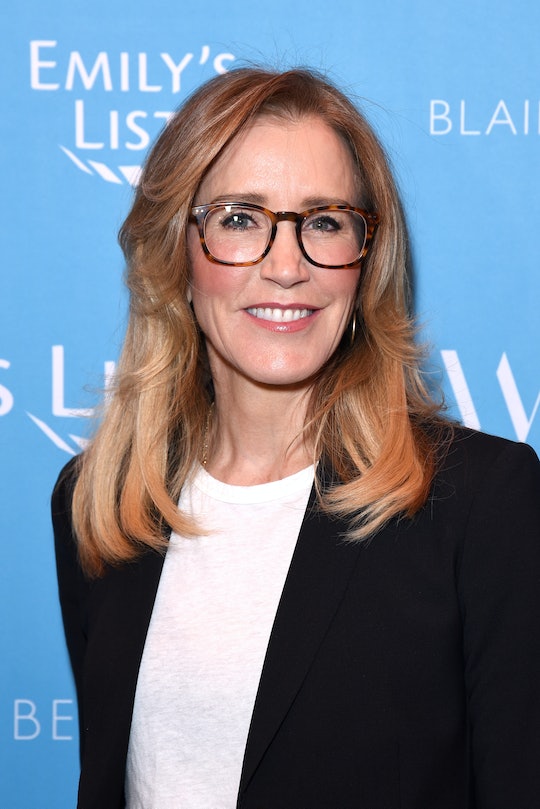 How Many Kids Does Felicity Huffman Have? The Actress Is Facing Serious Charges

Until Tuesday, March 12, actress Felicity Huffman was probably best known for her role as Lynette Scavo on Desperate Housewives. But now, her name has since been plastered on news outlets across the nation — and not for a good reason. According to USA Today, Huffman been charged for her reported involvement in a scheme in which "parents allegedly bribed college coaches and insiders at testing centers" to get their kids into elite colleges across the country. In light of the charges against her, people might be wondering how many kids Felicity Huffman has.

Romper's request for comment from Huffman's reps was not immediately returned.

If you haven't had time to read much about the the alleged scam — for which 50 people have been charged in the criminal investigation according to CNN — let's take a closer look. Because Huffman and Lori Loughlin are just two of highest-profile wealthy parents allegedly involved.

As CNN reported, the Academy Award nominee has been charged with felony conspiracy to commit mail fraud and honest services mail fraud. Specifically, Huffman and her husband — Shameless actor William H. Macy — have been accused of paying $15,000 to William Rick Singer's fake charity, which reportedly facilitated cheating for her daughter on the SAT, according to the Los Angeles Times, though Macy has not been charged.

According to USA Today, an affidavit says Huffman and Macy made a "purported" charitable donation of $15,000 to Key Worldwide Foundation in February 2018. This contribution was allegedly made to "participate in the college entrance exam cheating scheme on behalf of her older daughter," USA Today reported.

Their daughter, Sofia Grace, ended up with a 1420 on the SAT, The New York Times reported, which was 400 points higher than what she scored on a PSAT taken the year prior without having the same test administrator. Later on, Huffman allegedly arranged for her second daughter, Georgia Grace, to be involved in the scheme — before she ultimately backed out, according to The New York Times.

So with all that said, Huffman and Macy have two children, according to The New York Times.

"We’re right now in the thick of college application time, which is so stressful," he told the publication. "I am voting that once she gets accepted, she maybe takes a year off (to pursue acting)." Of his younger daughter, Georgia, he added, "She's interested in politics, political science and pursuing that. She’s in a very academic school and killing it."

As for Huffman's past remarks, according to the Daily Dot, a tweet from August 2016 didn't age particularly well. "What are your best 'hacks' for the back-to-school season?" she asked her followers.

It was quickly unearthed by Twitter and people had loads of comments... As one person responded to the 2016 tweet, "I like to wake my kids up early to get them prepared, have them read some books on the school list, I shop for clothes early, and I take a sh*tload of cash and pay off people so they can pass their tests. But getting them up early helps." (Ouch!)

So, there you have it. Felicity Huffman has a total of two children with her husband William H. Macy, and only time will tell if they decide to speak about this alleged scam.