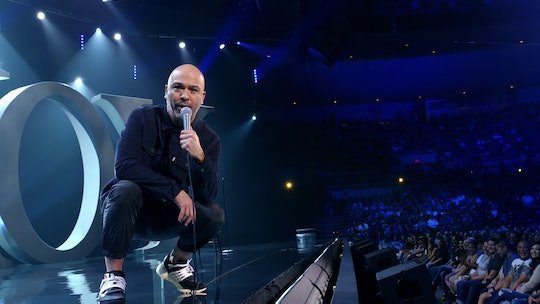 Jo Koy's Netflix special Comin' In Hot dropped June 12, and it says right in the description of the hour-long comedy special that he's going to give fans his "filter-free" take on fatherhood. This begs the question: how many kids does Jo Koy have? He has told stories about his teenage son before, but I would be annoyed if I were constantly the subject of my dad's comedy acts, especially as a teenager. So, I wondered if one clever child had somehow escaped embarrassment.

I did some digging, and I'm sure it's no surprise to you that Jo Koy only has one son. His name is also Joseph and he was born on April 21, 2003. That means he is 16-years old today and was 15 when Comin' In Hot was filmed. As he said in a live video posted to Koy's Facebook, he was 13 when his dad's first Netflix special dropped.

Honestly, all of those ages could either be a mortifying or an exciting time to be a subject of your dad's comedy. But "little Jo" seemed very cool with with his dad's career in the video. After all, it meant he got a day off of school and free food. "My son hasn't stopped eating ever. When my son eats he's thinking about food," Koy said in the video that featured the pair walking around the Netflix building on the release day of Live From Seattle in 2017.

Koy told Fatherly in 2017 that his own father was absent from most of his childhood, so that's why he's absent from Koy's comedy special while other family members are not. Koy said they reconciled when he was in college and ironically bonded through his comedy act. "We have a great relationship now. My dad’s my biggest fan," he said. "I was doing comedy and he was so excited for my comedy, whereas my mom wasn’t. So we bonded through comedy. We’ve kissed and hugged and made up and moved forward."

His dad even understands why he's not a part of the shows. "But I did feel bad! I told him, 'I don’t talk about your side of the family because I don’t know anybody!'" he said.

It's really not hard to see that Koy has learned from his dad's mistakes when it comes to raising little Jo. "I’ve canceled gigs so I could be at moments for him. That wasn’t a big thing for my dad. I don’t want my son to feel the way I felt." My dad is also a very big part of my life, and I know that little Jo and I are lucky, but I wish cancelling work events to be there for your kid was the obvious choice for every dad.

Koy told Fatherly that he is also trying to give his son a different experience than he had when it comes to his divorce. Koy's parents' divorce was ugly, but he has a very open relationship with little Jo's mom. "We’re good friends raising a beautiful child together — why fight over money? That only hurts my son."

So, he's funny, he feeds his son well, and and he knows how to be mature about money. That sounds like a great dad to me. Watching Comin' In Hot is also an awesome special to watch with your father or mother!